The 406 has been one of Peugeot's enduring success stories. Following on from the much-loved 405 models, the 406 added a new level of sophistication and quality when it was launched in 1996. The early shape car was only with us for three years before Peugeot decided to facelift it. The late shape car we examine here, available in four-door saloon or five-door estate guises, has been a steady seller ever since. As a used buy it represents quite a bargain, if only because the 406 is perceived by the trade to be not quite as desirable as more modern rivals such as the Ford Mondeo, the Renault Laguna II and the Mazda6 and even Peugeot would have to admit that the 406 can't match the all round excellence of these products. What it does offer is the sort of handling that Peugeot are renowned for, a shape that's stood the test of time very well and a reputation for quality engines. Tracking down a decent used 406 shouldn't be difficult. It's just narrowing down your choice.

Although the 406 first touched down in the UK in February 1996, it wasn't until May 1999 that the more commonplace late shape cars were launched. Identifiable by their more angular headlamps and tail lights, a revised centre dashboard panel with new heater controls and radio, the differences didn't stop there. Although the 1.8 and 3.0-litre V6 petrol engines and the 2.1-litre turbo diesel unit were carried over from the previous shape car, Peugeot added a new 2.0-litre petrol engine and a 90bhp HDi turbo diesel. A 2.2-litre petrol SRi version arrived for saloon buyers in Summer 2000 and a 136bhp 2.2-litre HDi diesel model was added to the range in March 2001. Borrowing technology from this engine, a 143bhp petrol powered 2.0-litre HPi was introduced in late 2001 and sold alongside the existing 137bhp 2.0-litre 16v powerplant. Peugeot revisited the 406's trim levels in late 2002, deleting the GTX model and at the same time separating the two door coupe version from the mainstream 406 range by calling it the Peugeot Coupe rather than the Peugeot 406 Coupe. Although this hardly seems a great vote of confidence in the 406's brand equity, the saloons and estates have remained a strong seller for Peugeot despite many other rivals appearing a good deal more modern.

The 406 cabin was revamped as part of the second generation changes - successfully as it turns out, giving it more of an upmarket feel. This has been achieved by a whole series of small but significant measures: resculpting the controls, improving the dials, using better quality materials and adding classy touches like the chrome trim now used on the handbrake and air vent buttons. The seats are better too, with more adjustment, higher backs and improved support. The driver also now benefits from an armrest and steering wheel stereo controls. Where the 406 didn't need changing was in the chassis department. The original model was the most engaging family saloon you could buy and this one's little different. Detail adjustments have improved the low speed ride and added extra feel to the standard power steering. Equipment levels remain strong across the range - twin front and side airbags are standard on every model in the standard range for instance, along with front foglamps, a trip computer and electric mirrors. Customers now choose from L, LX, GLX, SRi, Executive and V6 models, along with Rapier special editions. All feel plush, with quality fixtures and fittings along with nice touches like a penholder next to the gearstick. 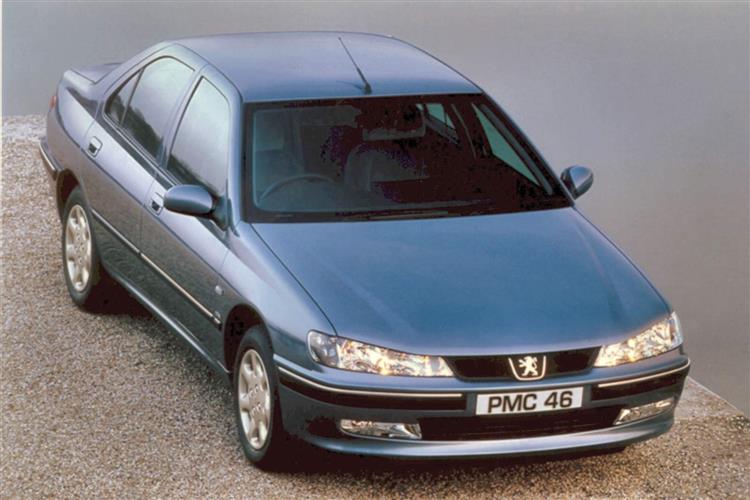