BEST OF BRITISH (some text hidden)

A fine Jaguar is a part of British tradition. Just the mention of the marque evokes visions of classic automotive art like the E-type and XK120 - cars that live on in the memory like a fine Bordeaux or a crisp Chardonnay. This reputation has been continued in recent years by the XK8. This superb Grand Tourer is every inch a Jaguar and every inch a world class sports car. It is good enough to trounce the Germans in a market sector that has been dominated by the likes of Porsche, Mercedes and BMW for over 20 years. It comes in two guises: the standard V8 XK8 and a supercharged version of this car called the XKR. Both variants are offered as either coupe or convertible. Brand new, the best of British power and grace doesn't come cheap: prices start below £44,200. As a previously-owned machine however, this Big Cat is a seriously good bargain.

The XK8 was first introduced in October 1996, and has changed little since then. The earliest cars are recognisable by the lack of a third rear brake light, as this additional safety feature was not added until May 1997. Keen drivers who want a Convertible XK8 should hunt down a post-October 1997 car, because this was when the company's CATS active suspension system, which was already an option on the Coupe, was made optionally available to Convertible buyers. At the same time, Jaguar added light sensitive headlamp switching and an automatically dipping rear view mirror. In May 1998, the XK8 models were joined by the XKR Coupe and Convertible with a more potent supercharged version of the 4.0-litre V8 as used by the XJR saloon. Then, four months later, all versions gained improved Servotronic II power steering. From late 1999, the range also gained the option of a clever radar-operated cruise control which automatically prevents the car getting to close to a vehicle in front. There was also an 'R' option kit including stiffened suspension and fancier gold-coloured alloy wheels. Silverstone limited edition XKR models arrived in mid-2000, with virtually all of Jaguar's performance options as standard - you'll recognise them by massive alloy wheels with prominent Bembo brake calipers and silver paint. Only 100 of each were sold in the UK. The 2001 year models got very minor styling changes including revised rear light clusters and new round front foglamps. Inside, the main improvements was a clever passenger restraint system able to sense where both front seat occupants were sitting and activate accordingly. Summer 2001 saw the launch of the XKR100 coupe and cabriolet models, celebrating what would have been the centenary of Sir William Lyons, founder of Jaguar. With only 500 examples built and loaded to the gunwales with extras, these will doubtless prove highly sought after on the used market. Summer 2002 saw a major update for the XK range. The engines were enlarged to 4.2-litres, the XK8 now generating 300bhp and the XKR 400bhp. Jaguar also revised the front end by adding trendy Xenon clear lens headlamps and also introduced new paint schemes, different badging and a smart new choice of alloy wheels to give a subtle makeover to the styling. There were more changes in spring 2004 with bigger wheels, bigger spoilers and a revised nose. An all new XK coupe and convertible range arrived in early 2006 spelling the end for this long-serving model.

As you'd expect from the 'best of British', virtually every creature comfort you can think of is included in the purchase price. Leather trim, automatic climate control, electric memory seats, a trip computer, alloy wheels and a superb stereo system are all incorporated and buyers also have a choice of two contrasting interior trim packages: Classic or Sport. Both make careful use of wood as a structural element in the interior rather than a visual embellishment. The Sport alternative is aimed at younger buyers, fitting interior designer Karen Anderson's beautifully trimmed cockpit design with darker veneers and a leather/cloth seat combination. Classic meanwhile, is the more traditionalist route, with burr walnut set among lighter, less sombre tones. Both bodystyles are 2+2s - which means that you get a pair of occasional rear seats. Unless you're either well below the age of consent or you're hitching a ride home from the local hostelry, these are too small to be of much use. More useful is the Jaguar's boot, which is the largest in the class and is capable of swallowing two sets of golf clubs. In comparison with the old XJ-S, the body is 25 percent stiffer; match that with a powertrain stiffer than any other in the class and it's not surprising that the XK8 feels tauter and more agile than any other luxury sportscar you can buy. For those who want more and don't mind a slightly harder low speed ride, Jaguar have developed a CATS (Computer Active Technology Suspension) option for both bodystyles (standard on the XKR). This includes two-position adaptive dampers under electronic control, plus a set of stunning 18" seven-spoke alloy wheels. 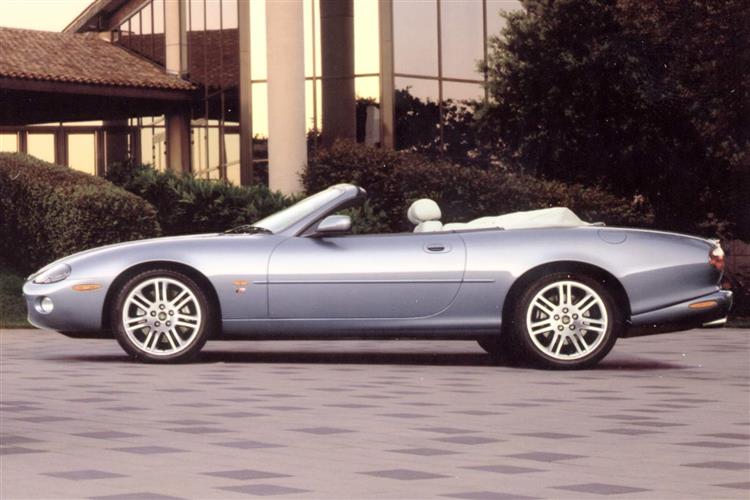