GONE BUT NOT FORGOTTEN (some text hidden)

BMW's 1999-on M5 was the car that started the horsepower war in Germany. Before this super-saloon arrived, 400bhp was a virtually unheard of figure for a sports-minded executive saloon to be developing. Once BMW had set the new standard however, a host of imitators appeared with even more power. But more power doesn't mean more desirable. Many still believe this M5 to be the pick of like-minded cars in its sector. Here's our guide to finding yourself the best one possible.

Late last century, performance enthusiasts intent on owning the world's finest sports saloon had been waiting with bated breath for the men at BMW's Dingolfing plant to unleash the latest red-hot M-Power version of the 5 Series, and in March 1999, the wait proved well worth it. With 400bhp and a V8 engine, the M5 rewrote the rules on what defined a premier league performance saloon. At a few pounds shy of £60,000 it certainly wasn't cheap, but judged on any objective basis, the M5 was quite simply the best car there was. Many would argue it still is. BMW made a number of cosmetic changes for the 2001 model year. Pay attention and you'd spot body-coloured rubbing strips, round fog lights and a redesigned front spoiler. The headlights were now of the fashionable clear lens variety and the indicator lamps became round. To help some of the M5 magic trickle down through the rest of the range, that model's wider chrome grille surround were found on all variants. The interior benefited from a few tweaks as well. A revised range of options were also available, including a Mini Disc system, a voice-controlled telephone and a larger television screen.

There aren't too many surprises with a 5 Series. You know it's going to be beautifully built, great to drive, understated and well equipped - and the BMW M5 is no exception. Once upon a time, for supercar performance, you had to buy a supercar. A cramped coupe in other words, with hardly enough space for a change of clothes in the boot. Then along came the M5. Launched in 1984, this was the first of a new breed of super saloon - the ultimate 'Q Car'. No stripes or spoilers. In fact nothing to indicate that this one and three quarter tonne family four-door could out-accelerate (and arguably out-handle) a Porsche 911. Not surprisingly, the concept caught on amongst the shy but successful. As sales increased, so did the power on offer - from 286bhp to 315bhp and 340bhp by the time production stopped in 1995. After that, BMW abandoned the super-saloon market to Mercedes and Jaguar, hoping that their V8-powered 540i would keep them in with a shout. It didn't. Which is why this M5 does the job properly. Under the bonnet lies one of the most powerful engines ever to be fitted to a production car of any kind. It's a 32-valve, quad overhead camshaft 5.0-litre V8 crafted from Alusil - a lightweight aluminium-silicon alloy. The output is an awesome 400bhp - 40% more than the already rapid 540i. Not that the neighbours would ever suspect. In true M5 tradition, the current model is discreet to the point of anonymity. A subtle front airdam, a tiny boot spoiler, gorgeous alloy wheels, clear indicator lenses, quad exhaust pipes and a small boot badge are the only giveaways. Inside, it's the same. You could be at the wheel of a well-specified 530d were it not for the chrome surrounds of the instruments with their red needles and little touches like the M gearknob which glows red at night. There's even a tyre pressure monitor. 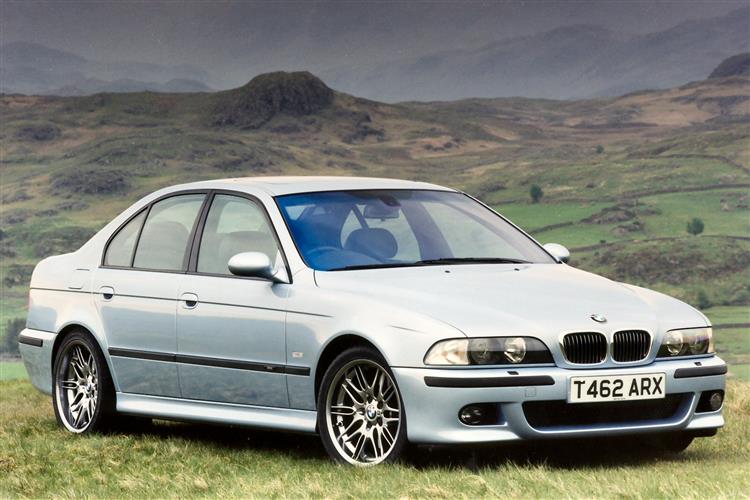