CLAWS FOR CONCERN? (some text hidden)

Ford have had a hard time getting over the Capri. The Probe never managed it, but the Cougar looks like it may be more successful. It appeals to a different customer; older, more affluent and often female. Unlike the Capri, you'd never pretend the Cougar is "the car you'd always promised yourself". Despite its bold new-edge styling, it's not the sort of coupe that turns heads or has small children asking what it'll do. No, the Cougar aims to distance itself from that image. It also looks to disassociate itself from the unfortunately named Probe, a car whose credibility was killed in the UK through its ownership by Gareth Cheeseman, an obnoxious office pest played by the comedian Steve Coogan. The Cougar is a far different proposition. Introduced in the summer of 1998, the Cougar was advertised by Dennis Hopper in a tribute to the movie Easy Rider. Understand the logic behind the advertisement and you'll see Ford's target market. It's aimed at those who want to live just a little bit dangerously, to relive their youth whilst still maintaining an element of practicality. Ford's research has also discovered that a large proportion of Probe buyers are female. So much for Dennis Hopper.

When the Cougar was launched in October 1998 it carried on Ford's New-Edge look seen before in the Ka and in the Focus which immediately preceded the Cougar launch. The styling was more extreme, yet more adult than the blandly inoffensive Probe that preceded it, and was met with quiet approval. It was offered with two engine choices, the 2.0 16v four-cylinder unit and a 2.5-litre V6 for the range-topping model. Both cars were competitively priced in comparison with their immediate rivals, such as Alfa Romeo's GTV and Toyota's Celica. Despite its competence, the Cougar was never marketed as an alternative to the more sporting coupes such as the Fiat Coupe Turbo or to other dynamic choices in that price band such as the Subaru Impreza Turbo. No, the Cougar was a cruiser, and a very good one at that. It was eventually discontinued in Spring 2001.

What You Getword count: 216

The Cougar is probably the most practical coupe you can buy. For a start, this is one of the few cars in the class to have a rear hatch rather than a boot and the result is probably more luggage space than most owners will ever need. The Cougar also leads its sector in terms of rear seat accommodation; this is about as spacious as a car of this kind is ever going to get. And probably about as safe too. The Cougar comes with twin front and side airbags, offering both head and body protection. It's 17% stiffer than a Mondeo and is even stronger in side impacts. In fact, tests suggest that in a side impact, passengers could be up to three times safer in a Cougar than in some other competitors. The specification is also class leading, with ABS and traction control, electric front windows, air conditioning and an immobiliser/alarm all standard. To this tally, the basic V6 adds a better stereo, leather seats and metallic paint (though you're pretty restricted on your choice of colours). So there you have it. Big, safe, well equipped and with a pair of better than average engines. If you like the image of a coupe, but don't want the downsides, the Cougar makes a good choice. 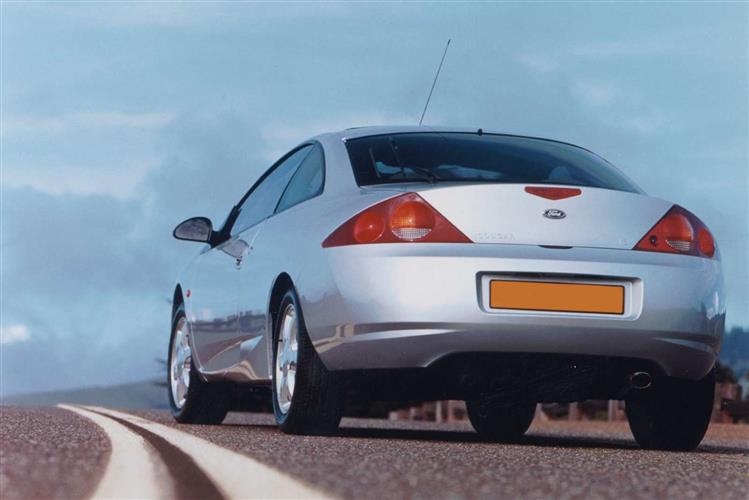