Peugeot's 206 had a tough act to follow. It's predecessor, the 205, had dominated European supermini sales in the Eighties and proved difficult to replace. The British-built 206 quickly found favour however, with striking looks and careful packaging. Used buyers seem to find it equally appealing.

At UK launch in November 1998, it was initially hard to see where the 206 was going to fit in. The supermini sector had for so long in Peugeot's case been filled either by the smaller 106 or three door versions of the 306 family hatchback that it seemed the French maker had forgotten the need for a supermini to directly take on the class-leading Fiesta. Initial choice was of three petrol engines - a 1.1, a 1.4 and a 1.6 - plus a 1.9-litre diesel. Trim choices were L (only for the diesel and 1.1-litre models), LX and GLX, plus a sporty 3-door XS designation for the 1.6. In April 1999 the luxurious, glass roof and leather-trimmed Roland Garros appeared with the 1.4-litre engine and a choice of manual or automatic transmission. In June 1999, a 2.0-litre GTi model was added to the range and, by the end of that year, the manual Roland Garros had gained a 1.6-litre engine. There was also a new 2.0-litre turbo diesel HDi unit, offered in LX and GLX forms, plus sporty D Turbo guise. The year 2000 saw a GT flagship limited edition sporting model at the top of the range, a spin-off from the ongoing rally programme. For model year 2001, the stunning 206 Coupe Cabrio was unveiled, with folding hard top roof. The 1.6-litre petrol engine was replaced by a 110bhp 1.6 16v unit which also powered the warm hatch XSi version (replacing the XS). The 2.0 HDi engine was now available to entry-level Style customers, the car carrying an 'Eco' badge. 'Multiplex' wiring technology was adopted in late 2001 to provide many of the big car features that would keep the 206 ahead of the chasing pack. 'Self-thinking' SMART airbags that respond to the force of an impact were now standard, as was a passenger airbag deactivation warning, doors which automatically unlock in an accident, a door ajar warning light, a plip key car location device and a separate digital display for the stereo, thus rendering it less thief-friendly. Early 2002 saw the introduction of a new alternative for diesel customers, the 1.4-litre HDi powerplant. This lightweight engine redressed many of the reservations some buyers had about diesels in small cars. Summer 2002 saw the introduction of the 206 SW, a compact estate version of the ever popular hatch and in Spring 2003 a ripsnorting 180bhp version of the 206GTi was unveiled. Shortly thereafter, the 206 was subtly facelifted to the tune of a honeycomb grille, the obligatory clear headlight lenses and a bigger chromed Peugeot lion badge on the back. Uniform coloured rear light lenses were also introduced and sportier models got body coloured side rubbing strips and bumper inserts. Then more changes for the 2004 model year. Trim levels were split into Classic and Sports Ranges. Classic was comprised of Style, S and SE while Sports included Quicksilver, XSi, XSi HDi and GTi. A 16-valve version of the 1.4-litre petrol engine was added as was the Tiptronic gearbox. Later that year, Peugeot launched the GTi HDi - a diesel hot hatch powered by a 1.6-litre HDi engine with 110bhp. The run out models introduced to clear the way for the launch of the 207 were badged Urban, Verve, Sport and GTi. The range was later slimed down again with only the Look trim level being offered.

What You Getword count: 193

Murat Gunak and his design team aimed to create a combination of VW build quality, Ford handling and Vauxhall value in the 206. Though not recording a perfect score in any of these areas, the little Peugeot performs well enough to score highly as a strong supermini all-rounder. Step inside and it's just like every other Peugeot you've ever sat in. Though the dark plastics used are rather sombre, the materials chosen are light and attractive. You wouldn't mistake this for an up-market saloon but it's an environment you'd be quite happy with, even on a long journey. Rear seat accommodation isn't one of the 206's strongpoints - but then you could say the same about most of the other cars in this sector. At least the boot is a reasonable size, thanks to compact rear suspension. As for the styling, well, make up your own mind: most think that that nose looks just great bearing down on you from behind. Our only comments are practical ones; the rear doors could be larger and the top of the tailgate is so low that it slightly cuts into the interior mirror's field of view. 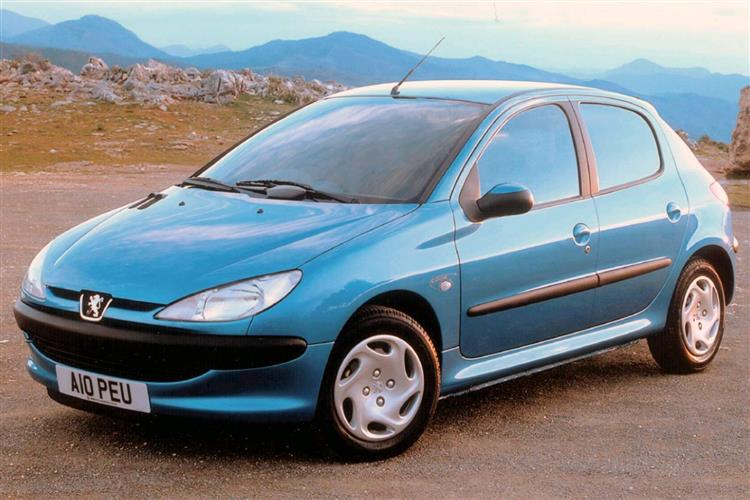