Buying an MPV is bewildering. All the main alternatives seem to look the same. Take Peugeot's 806. Most customers in this current MPV era have bought Ford Galaxys or that car's VW or SEAT clones; fine for the driving enthusiasts but in many ways not as practical as the Peugeot with its sliding side doors. The 806 too was cloned (Fiat's Ulysse and Citroen's Synergie are essentially the same car). It is, however, sometimes better specified than its stablemates - depending on the model you choose.

The 806 was launched in October 1995 at around the same time as its stablemates from Citroen and Fiat, with mainstream models available in SL or SR forms. Five-seater customers had these two trim options while 7-seat buyers could also have the plusher SV. There was also an eight-seat SL. Under the bonnet, there was the choice of 2.0-litre petrol power or a 1.9-litre turbo diesel unit. Early in 1998, there were slight cosmetic revisions to give the car a smoother appearance but the engines remained unchanged. In December, trim levels were revised to LX and GLX levels and air conditioning became standard on all models. Late in 1999 Peugeot replaced the aging 1.9-litre turbo diesel with the 110bhp, two-litre Hdi engine and added a luxurious GTX trim level to the line-up. In Summer 2000, a special edition Quiksilver model was added to the range and the eight valve 2.0-litre petrol unit replaced with a 16v 2.0 engine. Automatic models got a 'Tiptronic'-style gearshift.

Despite reasonably affordable prices, the specification is quite good. There's an airbag in the adjustable driver's steering wheel as well as controls for the four-speaker stereo. In addition, all models got power steering, central locking, an engine immobiliser, front electric windows, adjustable headlamps, tinted glass, front fog lights and, from December 1998, air conditioning. The SL version could come complete with eight seats, but if you're planning to use them all on a regular basis, it would be as well to consider the optional roof bars and roof box available from dealers since luggage space will be restricted. Either way, the sliding doors glide back to reveal a wider range of interior permutations than you could shake a stick at. The front seats swivel through 180 degrees to face backwards, the reason being that you can do just about anything you want with the others. They can be relocated on alternative mountings to maximise legroom or reclined, swiveled, folded, converted into picnic tables and removed altogether. In a few minutes, your 806 can change from family taxi to removal van, executive mile-cruncher to impromptu conference room. All this from a vehicle that takes up no more space on the road than the average medium range estate car. It sits a fair bit higher of course - and so do you, which takes a little getting used to. After a few miles however, the superb visibility offered by that vast expanse of glass begins to become a boon. Given a few more, you might even get used to the dashboard-mounted gearstick and locate the handbrake (on your right). In day-to-day use, you and the family will notice a careful selection of thoughtful touches. There's even a sprung holder for the driver's spectacles or sunglasses in the driver's door. Whether you're using your 806 for a small children's party or simply somewhere to sleep, you'll find Peugeot have thought ahead. 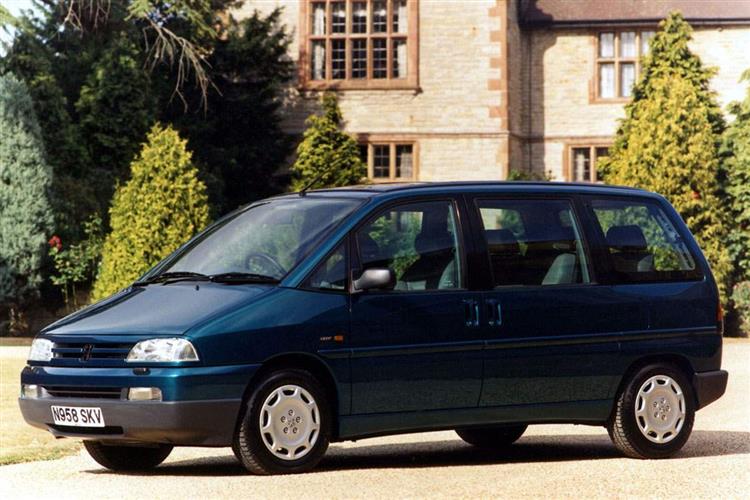