Think of a handful of superminis that define the art of small car making. Chances are, Peugeot's 106 will be amongst them - and, if not, why not? This, after all, was the little car with big interior ideas that showed city driving could be fun. Launched in 1991, the 106 led the supermini sector for several years before new arrivals from VW, Ford and Fiat left it as an appealing also-ran. Peugeot wasn't having that, hence the arrival in 1996 of a heavily revised model; that was larger, sleeker, safer and faster than before. There are lots on the used market and a106 is the thinking person's small car smart buy.

The 106 was Peugeot's best-handling small supermini and an instant hit. To begin with, the car was offered as a three-door hatch only with 1.0, 1.1, 1.4 and 1.4-litre fuel injected engines (the 1.4i was used in the superb XSi hot hatch). A 1.4-litre diesel arrived in 1992 as did a five-door option. The diesel was enlarged to 1.5-litres in 1994 and a 1.6-litre petrol flagship introduced (this engine was also used in injected form in a revised XSi). A 1.3-litre budget hot hatch - the Rallye - was announced in 1994 but quickly dropped only to re-appear in 1.6-litre form for the 1998 model year. The second generation 106 arrived in 1996 with 1.4, 1.6 and 1.5-litre diesel engines that were pretty much unchanged (though the 1.4 now had multi-point injection). A 1.6-litre fuel injected GTI arrived in 1997. The smart new body was 11cm longer than that of the old car which didn't sound very much until you saw the result in the metal. This modest increase was enough to resolve the identity crisis that had blighted the previous 106, a car unsure as to whether it should be amongst tiny Fiat Cinquecentos or small but spacious Fiestas. The second generation three and five-door 106 models in contrast, were unquestionably out to challenge the Polo and Fiesta on more equal terms even though they remained a little smaller than either. Peugeot didn't see this as a problem, pointing out that few supermini buyers regularly use their rear seats. The second generation 106 is recognisable first by its new nose, closely resembling that of the larger 406 saloon. Look closer and you may well also spot the new wheels, the revised rear taillights, the less flimsy door handles and the high-level brake light set into a larger rear window. None of which is enough to disguise the 106's familiar French identity. When the new 206 range was launched in November 1998, the 106 line-up was slimmed down to the Zest range (available in Zest, Zest 2 and Zest 3 forms with either 1.1-litre petrol or 1.5-litre diesel power), the hot hatch 1.6-litre GTi and an ever-changing selection of semi-permanent 'special editions' such as the Quiksilver, Look and Independence. By the start of 2004 it was all over for the 106.

A surprisingly spacious little car that's great fun to drive. Though the 106 might be 141mm (5.5ins) shorter than its older 205 stablemate, there's almost as much room inside thanks to a long wheelbase. Careful sculpting of the side panels means there's an enormous amount of elbow space, while deep windows create a welcome airiness. Access to the rear on 3-door models is easy, thanks to wide doors which cut into the roofline. Rear passengers gain entry by flipping a catch at the base of the front seats. These slide and fold, as well as having a useful 'memory' with returns them to their original positions. Luggage space, though less in total than the 205's, is still big enough for the weekly supermarket shop. The 106 is also kinder to the environment and, say Peugeot, safer in an accident. Though from the outside, the resemblance to larger Peugeots is obvious, it's true to say that the car really has much more in common with its PSA stablemate, the Citroen AX. The two cars are very different in character however, which is precisely as the French designers planned it. 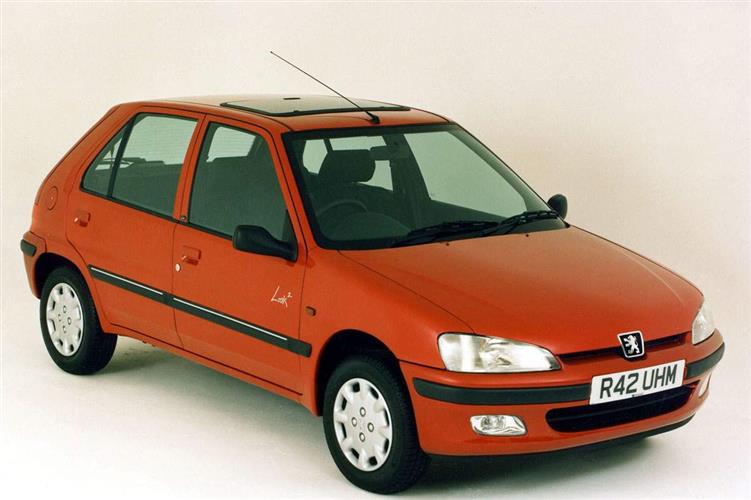