Many of us have grown up with Ford Fiestas. This car is an intrinsic part of modern small car motoring - it's as simple as that. And the model we're looking at here? Well, it's the sixth generation version, which sold between 2002 and 2008. This car, more than any other Fiesta, represented the single biggest advance in the history of this iconic model line, fir the first time offering decent interior space as well as the car's usual class-leading driving characteristics. Here's how to bag a good one.

By 2002, without a major re-design in seven years, the Fiesta was beginning to be overtaken by more modern and more spacious rivals. In response, Ford took a radical approach, designing a car that notched back the sporting focus a little but which offered a good deal more rear seat space and luggage utility. There was a choice of three or five-door bodystyles, with buyers who wanted even more versatility being offered the option of the slightly larger Fusion model. Entry-level Fiestas had either 1.3 or feistier 1.25-litre petrol engines, both unremarkable, but better powerplants were to follow in 2004. Towards the end of that year, a revvy 150bhp 1.6-litre petrol unit was installed in the new hot hatch ST 3-door model, while an equally good 1.6-litre TDCi diesel represented the range pinnacle for 5-door buyers. Don't worry if you can't stretch to one of the post-2005 facelifted models. This was a cosmetic nip and tuck, with minor cosmetic changes inside and out. The grille was updated with a diamond mesh design, the headlamps were pointier and the side mouldings became thicker as they progressed rearwards. The rear lights were reshaped were the bumpers and the overall effect is a slight move away from the Fiesta's inherent chunkiness in a sleeker, more dynamic direction. The quality of the interior materials was also boosted.

What You Getword count: 501

The design is everything a modern Supermini should be - as you'd expect, given that Ford had plenty of time to examine the competition during this car's lengthy development. The first thing we should talk about is space. Rival offerings with Tardis-like interior dimensions had rendered the MK5 generation Fiesta a touch quaint, and nowhere was this more evident than in rear seat room. Economy class on an Aeroflot internal flight sprung to mind when snugly ensconced in the back of the little Ford. That's no longer the case of course. With the MK6 Fiesta, Ford were consciously out to make it a significantly larger car. In fact it's 87mm longer, 50mm wider and 100mm taller in five-door guise. Even the three-door version makes the old MK5 model seem like one of those tiny citycars. You might assume all this to mean that this car is not as easy to park or as simple to thread through city streets as its predecessor. You might think that, but you'd be wrong, thanks largely to the glassy bodyshell which does an excellent job in disguising the extra bulk. Whether the current car is better looking than its predecessor is a matter for debate. Whereas the front end cribs its styling cues from the larger Focus Family Hatchback, the rear end divides opinion, looking like a bevelled and chamfered Vauxhall Corsa. It's no great beauty, that's for sure, but it's undeniably effective in achieving that goal of providing superior internal accommodation. Drop into the driver's seat and you'll be greeted with a dashboard that adopts many of the quality conventions of the MK3 (2000-2007) Mondeo range, and that's good news. For those who enjoy tracing the lineage design, that Mondeo's interior designer was poached from Volkswagen - and it shows. Mind you, it's easy to see where cost has been excised from the Fiesta, competing as it does in a class where margins are utterly cut throat. Some of the fascia plastics feel somewhat hard and nasty and anti lock brakes are an extra cost option across most of the range. Cleverly however, Ford appreciated that the bits of the cars we physically touch most often lend the strongest impression of quality, and to this end wisely fitted leather-trimmed steering wheels and tactile gear shifters. Another example of intelligent design comes in the shape of rear head restraints that are deliberately uncomfortable when not slid up into their deployed position. This encourages rear seat occupants to utilise them properly but gets around the issue of encumbered rear vision when rear head restraints are traditionally fitted. Equipment levels are reasonable, spread across Finesse, LX, Zetec and Ghia trim levels, plus the sporty Zetec-S and ST variants. All MK6 Fiestas get intelligent windscreen wipers, a CD stereo, central locking and Ford's 'Intelligent Protection System'. The figures should stack up OK too, with low day-to-day running costs and reasonable projected residual values. A Durashift EST sequential manual transmission was available as an option on the 1.4 16v. 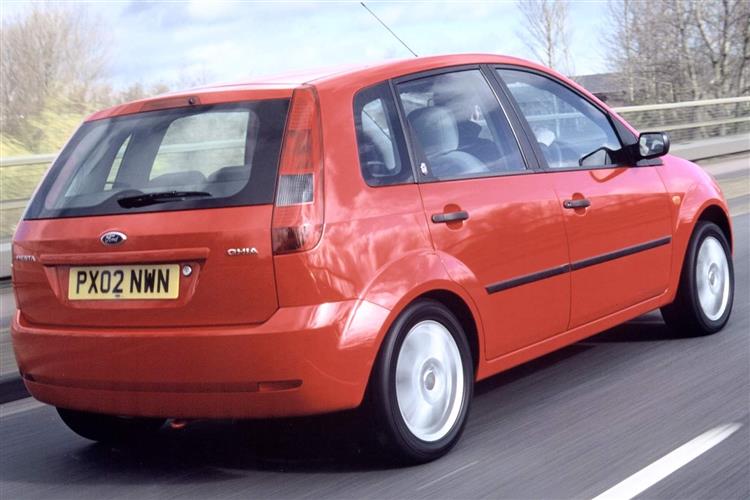