Although Touring designations have long been a part of BMW's history, it's been the 3 Series Touring that really established the concept of the lifestyle estate. Here was a market sector that emphasised performance, fun and youthfulness, neatly sidestepping all the connotations estates used to be saddled with. The E36 3 Series, produced from 1995 right through to 1999, was enormously successful and spawned an ever-wider array of Touring variants. One of them may well have your name on it. Here's how to make sure it's not a duffer.

Although the swoopy E36 third generation BMW 3 Series arrived on these shores in the early spring of 1991, British customers were forced to wait until as recently as March 1995 for the first of the Touring models. Two cars were initially launched, the 320i and the 328i, followed later in the year by the 318tds diesel. January 1996 saw the addition of a 318i model and it wasn't long before this was joined by the Touring version of the 143bhp 325tds. January 1997 saw the 320i model discontinued, replaced by the 170bhp 323i whilst the entry-level 316i arrived in April 1997, January 1998 was pivotal for the Touring range with SE trim designations added across the board, indeed it was the only trim level the 325tds and 328i could then be purchased with. Most of the E36-series Touring models were discontinued in November 1999 to make way for the next generation car, known amongst BMW enthusiasts as the E46 cars. The 328i Touring, however, soldiered on alone until withdrawn from sale in July 2000. A wider selection of value added ES and Sport versions were added in early 2003.

Though Audi, Honda and Rover all tried to emulate the original Touring's profitable success, none managed to create quite the same blend of speed and style. Arguably, their alternatives were too practical in contrast to the original BMW's very limited loadspace. Hence the Bavarians' elaborate care when they designed the E36 series Touring. Though the 370-litre luggage bay is 12% larger and 13.5 inches wider than that of the original Touring model, this 3 series variant still remains not so much an estate as a hatchback with a backpack. That said, those with active lifestyles should find the car a more useful tool than before. BMW's argument was that you shouldn't judge a boot merely by its dimensions but by the kind of leisure equipment that can be shoehorned into it. Consider the car with this criterion in mind and it actually scores quite well. The importers boasted that its velour-carpeted boot could easily swallow either a full-sized bicycle or four sets of golf clubs. Skis meanwhile, can be poked through a hatch in the split rear seat. Loading is easy, though the taillights do still encroach a little for wider items. Otherwise of course, the recipe is pure BMW 3 series - indeed, it's only by looking in the rear view mirror that you can tell you're not driving the saloon. Of course, you paid a little extra for the Touring's versatility - a premium of around £900 over the equivalent 4-door models - though BMW does point out that in return for that, you also got a slightly higher level of specification. These days the price differential is much reduced and Tourings are reasonably plentiful. 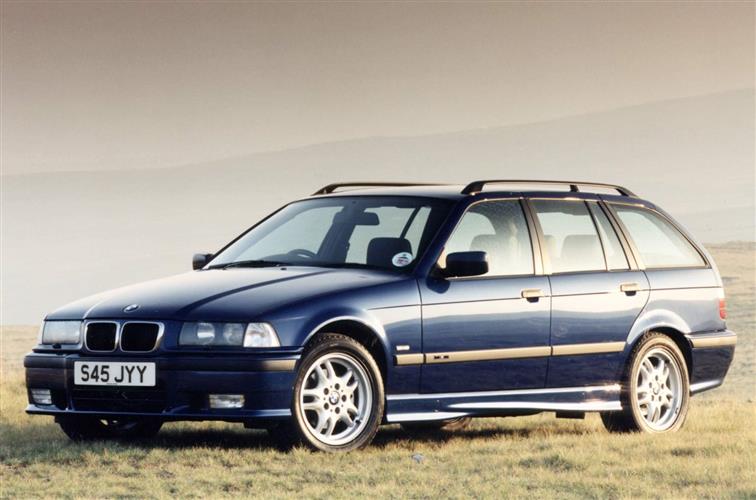