KING OF THE LOAD (some text hidden)

It's easy to take the Ford Mondeo Estate for granted. Even with healthy annual sales, few who've yet to get behind the wheel of a Mk 2 Mondeo realise quite what a superb vehicle it is. The press lavishes praise over the latest shiny faces in the medium estate class whilst the Mondeo continues to represent the true benchmark for dynamic excellence. As well as being a hoot to drive, the Mondeo Estate fulfils its role as a load lugger with aplomb. If you're not overly concerned with a premium badge stuck to the snout of your car, the MK2 Mondeo Estate takes some beating. Used examples are relatively plentiful and there's a wide range of engine and trim options from which to choose.

Just as many were predicting the imminent demise of the medium range estate market, Ford launched a car that was just too good to overlook. The explosion in popularity of medium sized MPVs like the Vauxhall Zafira and Citroen Xsara Picasso squeezed the medium range estate market from below while premium sportwagons like the Alfa 156 and the BMW 3 Series Touring further eroded Ford's market share from above. Although the Mk2 Mondeo had been a serviceable load lugger what was needed was a car that could still fulfil its practical remit but offer an upmarket feel. Few were ready for what Ford unveiled. With the exception of the unexceptional 2.0-litre TDdi turbo diesel engine, the Mondeo barely put a foot wrong. Keen to rectify this oversight, Ford launched the state of the art common rail 2.0-litre TDCi engine in 2001 and made a series of detail changes aimed to keep the Mondeo at the top of the tree. Electronic Brake Assist, once a £250 option, was fitted as standard across the range. This reduces stopping distances by augmenting the driver's braking effort with additional hydraulic support thus ensuring that maximum braking efficiency is reached. Security was also boosted by the introduction of auto relock. If a locked Mondeo is unlocked using the remote key fob and no doors are opened within 45 seconds, the system will automatically relock itself. In addition to this, convenience features such as automatic reverse wash wipe were phased in. This automatically activates the rear screen wiper if reverse is selected whilst the windscreen wipers are on. Sounds simple, but then the most elegant technical solutions usually are. The range was added to in spring 2003 with the launch of the 3.0-litre 151mph ST220 sports estate. Those who'd felt short changed by the Mk2 ST200 emerged metaphorically beaten over the head with a sockful of quarters after a spell behind the wheel of the ST220. A powerful yet economical 1.8-litre SCi engine was added to the Mondeo line up in autumn 2003, alongside Euro IV compliant TDCi 130 diesel engines. Two more new engines arrived in time for summer 2004. A 204bhp 3.0-litre V6 and a 155bhp TDCi engine which was offered in the ST TDCi.

Elegant is certainly a word that applies to the Mondeo's interior. Flick the switches, then check the quality of fit and finish. Take away the Blue Oval badge and you'd probably guess at compact executive class leaders like Audi's A4 - maybe even BMW's 3 Series. Except, that this car isn't compact. You don't need a tape measure to know that. In fact, there's as much space inside as Ford offered in its old flagship Scorpio, a car from the next class up. And all of the same gadgets, niceties and safety standards. As for overall space, well the rear load bay offers a generous 0.54 cubic metres with the rear seats in place, and is refreshingly free of the boominess that often afflicts this body shape. All right, so you could get more by opting to go the MPV or 4x4 route - but then you'd have to sacrifice driving satisfaction. Equipment levels include most of what you would expect - air conditioning, front electric windows, a decent quality stereo and so on. There's plenty of stowage space around the cabin too, with perfectly-shaped homes for items like window squeeges, atlases, drinks cans, tapes, CDs, owners manuals and mobile 'phones. Notable options include a facia-mounted CD autochanger and a DVD video system with screens mounted in the back of the front head rests: with films or linked to a PlayStation, that should keep the kids quiet on long journeys. 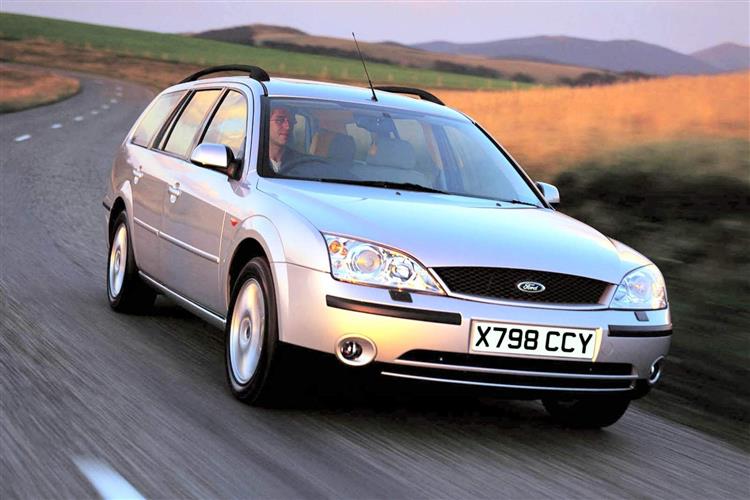