STUCK IN THE MIDDLE WITH YOU (some text hidden)

Although it seems that almost everybody is now jumping on the Coupe Cabriolet bandwagon, Peugeot were among the first to popularise the genre in this country and if you're after a reasonably priced car of this ilk, the French marque represents your best option. The 206CC has been the big seller but if you want something altogether bigger, more sophisticated and a good deal better looking, you'll need a 307CC. Here we take a look at whether one of these technically complex cars makes a sound used purchase.

Prior to the 307CC arriving on the market in July 2003, your choices for a tin-toped cabriolet extended to either a 206CC or some seriously expensive tackle like the Lexus SC430 or the Mercedes SLK and SL models. In the middle market where most prospective cabriolet buyers did their shopping there was a big, fat zero. With the benefit of their experience with the 206CC behind them, Peugeot were able to bring the 307CC to market a crucial few months before their big rivals Renault could launch the Megane CC. Available with a two-litre engine of either 138 or 180bhp, the 307 CC was an instant hit, its lines a good deal better resolved than many of the rather lumpen coupe cabriolets we've seen since. The 307 CC was facelifted in time for summer 2005. The gaping air-intake in the front bumper, huge headlamps and shortened bonnet with pronounced side ridges all mark these cars out. In addition, there were trim enhancements, a 2bhp power boost for the 138bhp petrol engine and a 136bhp HDi diesel engine to top off the range. The 308 CC arrived in 2009 spelling the end for the 307 version.

What You Getword count: 423

It seems virtually compulsory for each subsequent cabriolet release to one-up its predecessors in the sheer complexity and ingenuity of its roof mechanism. Although the folding metal roof isn't the newest idea on the block (Peugeot were in fact at it in 1934 with its 401 model), it can still surprise bystanders, largely due to the fact that with the hood up, the 307 CC just doesn't look like a convertible car. The roofline is sleek and low slung in proper coupe tradition and Peugeot gave the car's credibility a major boost by announcing that the 2004 World Rally Car would be based on the 307 CC body. Modern multiplex wiring techniques mean that many sophisticated electronic functions have been included. Peugeot list a series of refinements as long as your arm, most of them concerned with safety. As well as the standard anti- lock brakes, traction control and twin front airbags, the 307 CC features Electronic Brake Force Distribution (EBFD), Electronic Stability Programme (ESP), side airbags, automatic rain sensing wipers and automatic light sensing headlamps, seatbelt pretensioners and pyrotechnically operated rear rollover hoops that automatically deploy if the car thinks that, despite all the electronic safety systems, things are going to go dirty side up. A Thatcham category 1 alarm, electric windows and door safety brackets that prevent the doors opening in the event of a high-speed incident complete the ensemble. You certainly can't accuse Peugeot of ignoring the detail. Standard equipment on both cars includes cruise control, digital air conditioning, aluminium interior detailing and a full body coloured exterior. The 180bhp version features a comprehensive equipment list that includes 17-inch alloy wheels, half- leather trim sports seats, rear parking sensors, electrically folding door mirrors and a five-disc CD autochanger integrated into the fascia to prevent theft. The multiplex wiring system means that optional extras such as satellite navigation and the hands-free phone system can be integrated easily and cost effectively when specifying the car. Other commonly specified optional features you'll come across include pearlescent paint and a full leather interior trim. Like many cars of its type, the Peugeot 307CC offers a decent sized boot, the capacity of which is decimated when the hood is folded down but it's a price many are willing to pay for the additional refinement, safety and security that the metal roof affords. Both cars feature a manual gearbox but the 138bhp also offers the option of a four-speed automatic, which is a boon for those who want to sup on some particulates in the city. 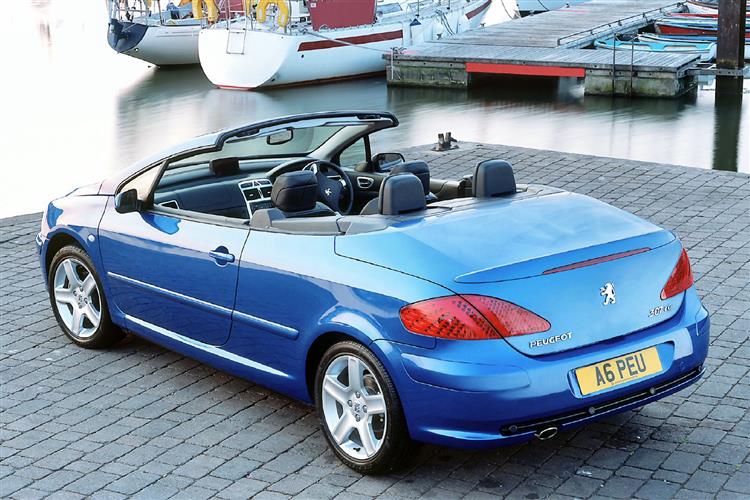