Whatever else you think of Renault, being slow to react to market trends isn't one of them. Realising that the market for the traditional, boxy family estate was fast disappearing down the gurgler, the French company introduced the sleek Laguna Sport Tourer range in 2001. With their Espace and Scenic variants capable of satisfying those customers who wanted to haul about a whole lot of fresh air inside, the Sport Tourer could be made to look a little more elegant. It's still one of the best-looking medium states around and has been quietly successful in the sales charts. Finding a decent used example shouldn't be too tricky.

Laguna Sport Tourers were given their press fanfare in December 2000 with the first cars arriving in UK dealers in January 2001. Three multivalve petrol engines were available, of 1.8, 2.0-litre and 3.0-litre capacities as well as a 120bhp dCi diesel powerplant. Trim levels followed the Renault trend, starting at Authentique and running through Dynamique and Expression with Initiale specification for the 1.9dCi and 3.0-litre cars and a range-topping Initiale available in 3.0-litre guise only. The 210bhp 3.0-litre models represented remarkable value, offering a genuinely rapid estate at prices equal to the opening rungs on the prestige ladders. March 2001 saw the option of a five-speed automatic gearbox offered with the 1.8-litre engine, knocking power back from 123bhp to 118bhp in the process. A 2.2-litre dCi engine was also unveiled which packed a hefty 150bhp punch. In early 2003, Renault introduced a 165bhp 2.0-litre turbo engine, designed to plug the yawning gap between the 140bhp 2.0 16v engine and the 3.0-litre 210bhp V6 powerplant. At the same time, a value-packed Dynamique Techno trim level was announced, offering additional features designed to appeal to private buyers but by Spring 2004, that trim level had been replaced by the GT. Renault weren't finished either, 2005 brought more revisions with revised styling and upgraded interior materials. A key development was the Euro IV development of the dCi 120, which was introduced with a 130bhp power output. The trim levels were also reshuffled with the GT specification becoming solely available with the high performance GT205 model which packed a 205bhp version of the 2.0-litre turbocharged petrol engine. A little later on, the 2.2-litre dCi engine was replaced by a 2.0-litre dCi with an identical 150bhp output. Navigation versions of the Expression and Dynamique arrived in early 2006, making colour screen satellite navigation more easily affordable. These were joined by the Privilege Navigation later in the same year. An all new Laguna was unveiled in autumn 2007.

This car couldn't be more different to the model it replaces, the old Laguna Estate. Though spacious, that car was certainly no beauty. Moreover, the optional third row of seats it offered were largely pointless, first because they were too small for adults and second because most people wanting a seven-seat capacity usually bought an MPV instead. Its hardly surprising then, that the Laguna II marks a change of approach on this front - though not as great a change as you might think. In the car park, the Sport Tourer has all the styling hallmarks that mark out cars like BMW's 3 Series Touring and Audi's A4 Avant. Arguably, it's even better looking. Where Renault has set a new standard is in being able to provide lifestyle chic with load-lugging capacity. Sure, there's less space than there was in the old model but not that much: expect to find 475 litres with all seats in use and up to 1,500 litres with the seats folded flat. Aside from this of course, it's the same recipe as the Laguna II hatch: the engine choice is largely identical and there's not much of a price premium for the extra carriage space. In a medium range market that's assuming an increasingly Germanic feel, Renault's Laguna Sport Tourer arrived as something of a breath of fresh air. No chiselled edges or sombre plastics: instead, plenty of design flair and innovative thinking. We've heard - and seen - this from Renault before of course. The difference is that this time, the creative approach was been matched by standards of quality far above anything the company had previously produced. 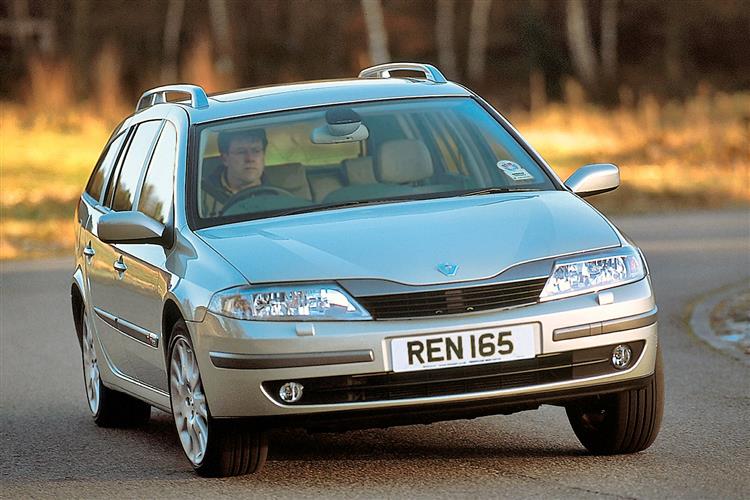