There's something about a convertible car that sparks off all sorts of glamorous images: of blatting along the Cote d'Azur with a sophisticated brunette clad in Chanel headscarf and shades. The reality is frequently of wrestling with a recalcitrant roof at the side of some windswept bypass before being saturated by the British summer. While the Vauxhall Astra Cabriolet can't guarantee the first scenario, it does a great job of avoiding the second. With an electrically powered roof and an almost total absence of 'convertible caveats' it's the open-topped car for those who felt that such a car was beyond their budget. As a used prospect it makes a surprising amount of sense, offering a modern soft top at a decent saving over new.

After a break of two years the Astra Convertible returned again in 2001, following on the heels of the Bertone-styled Vauxhall Astra Coupe upon which it was based. For a while it was marketed as the Astra Coupe Convertible and some sellers may still refer to it thus, but a few months later it became simply the Astra Convertible. Four models were available, a base 100bhp 1.6i, a 123bhp 1.8i, the smooth 145bhp 2.2i and the fire-breathing 192bhp 2.0-litre Turbo. Leather-trimmed Edition 100 models were launched towards the end of 2002 to mark Vauxhall's centenary. The Astra TwinTop - a folding hardtop version of the mkV Astra - arrived in spring 2006 to replace this model.

The Astra cabin in this guise feels sharp and classy, particularly with the optional leather trim in place. More importantly, from the outside, the car looks even better. Unlike the old Astra Convertible, there's no ugly roll-over bar to spoil the pretty lines, nor is there any need for a fiddly tonneau cover. Instead, the hood is properly concealed beneath a metal cover behind the rear bulkhead. This hydraulically opens and closes to swallow both the roof and the glass rear window - plus the whole process is completely automated with no clips, catches or poppers to worry about. Just as you'd find in only of those prestigiously-badged soft-tops. In fact, Vauxhall even stole a march on some of its rivals by offering the owner the option of raising and lowering the roof without being in the car at all. Picture it. You're seated beneath a canopy at your favourite roadside cafe and it begins to rain. But there's no need to get up and leave your coffee. You simply press one of the two central locking buttons on your remote control keyfob for more than two seconds and the roof will close automatically in just 30 seconds. The same time it will take to open if you've parked in the rain only to find that the sun has now come out. In addition, you can lower all four windows electrically using the same remote control unit and of course, there are also switches in the car itself to perform the same functions. The roof itself is a three-layer affair and the rear window glass is heated and scratch-resistant. Unfortunately, the must-have windbreaker (that slots behind the front seats to keep interior buffeting to a minimum at speed) costs extra. At least it slots neatly away on rails when not needed. As previously mentioned, Vauxhall worked hard to make this car the first true full four-seater in the class and, thanks to a long 102-inch wheelbase, they largely succeeded for all but the particularly long-legged. The car will easily swallow a weekend's luggage too, thanks to a 330-litre boot (big enough for two sets of golf clubs). It would have been even better if the two rear seats could have folded forward to increase this but instead, buyers will have to make do with a standard load-through facility apparently big enough for two pairs of skis and one snowboard. Standard equipment levels are pretty good, running to air conditioning, electric windows, sports seats, twin front airbags, a CD player and alloy wheels. Side 'bags are only optional but you do get anti-whiplash head restraints and Vauxhall's patented pedal release system (to improve leg protection in a front-end accident). 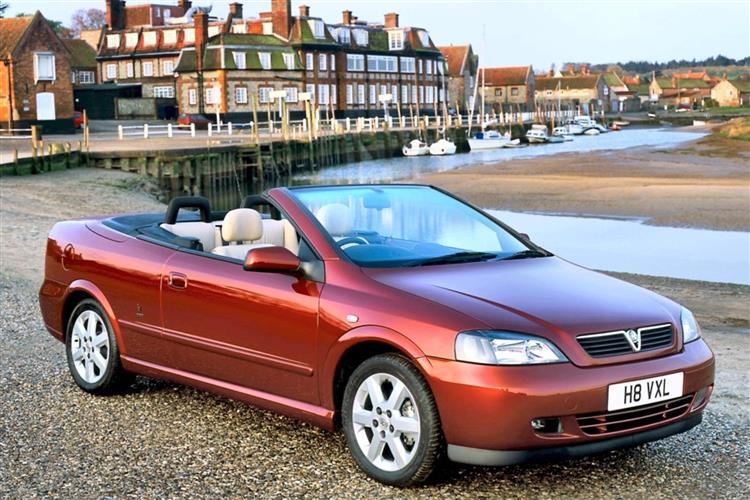