With the benefit of hindsight it's easy to be a bit superior about the Capri, the model Ford billed as 'the car you always promised yourself'. Countless gibes about fluffy dice, Carlos Fandango body kits and references to the Capri being something of a Basildon Bullet have been levelled at the pretty coupe over the years but history is coming round to Capri logic. As a serious and successful attempt to combine the disciplines of sports car and family transport, the Capri deserves credit. No fewer than 1,886,648 rolled down various production lines during its entire eighteen-year lifespan but for the purposes of this guide we'll limit ourselves to the quad headlamped Mk III cars built in Cologne between 1978 and 1987. Well, most of them.

Based on the Capri MkII floorpan, the MkIII model was identified by its smart four-headlamp configuration, restyled bonnet and bigger, ridged rear lights. A more elegant design than that which went before it, the Capri MkIII was initially offered in L (1.3 and 1.6), GL (1.6 and 2.0), S (1.6, 2.0 and 3.0) or Ghia (2.0 and 3.0). The Capri L was something of a duffer. being powered either by a 57bhp 1.2-litre overhead valve engine or a wheezy 72bhp single choke 1.6-litre mill. The rest of the range were far more fun, the 1.6-litre engine being an uprated 91bhp twin choke version whilst the 2.0-litre was good for 101bhp and the torquey 3.0-litre generated an unstressed 138bhp. The S was the trim level of choice, as it included lairy sill decals, checkerboard Carla fabric trim and the all-important rubber spoiler. The Ghia was the luxury model, boasting everything the suburban lounge lizard could aspire to including a mono radio cassette player and a dual tone horn. 1981 was a pivotal year for the Capri. Minority interest models such as the LS and the Calypso and Cameo special editions were launched, but it was the Capri 2.8i that was the big news. With lowered suspension featuring Bilstein dampers, uprated springs and thick anti roll bars the 2.8i meant business. A 160bhp engine provided all the tail-out action you could handle and it became an instant classic, regularly thrashing far more prestigious far in comparison tests. In February 1984 the quite astonishingly bespoilered Tickford Turbo Capri hove into view. Resembling Moby Dick after being coated in Bostik and dragged through your local branch of Ripspeed this 205bhp monster was best described as 'of its era'. Nevertheless a sprint to 60mph of just 6.5 seconds would keep most contemporary sports coupes honest. The Capri range was subsequently rationalised until only the 1.6 and 2.0-litre Laser models and the 2.8i remained. The 280 and Brooklands models are collectable last of the line Capri variants launched before the enduring coupe finally shuffled off this mortal coil, to be replaced some years later by the blandly competent nonentity that was the Probe.

What You Getword count: 127

The Capri was designed from the outset to be a practical coupe. It's a full four seater, although rear headroom is a touch cramped for taller passengers. The back seats can be folded, together or individually, to optimise luggage space. The overall load length then increases from 37 inches to over 65 inches with a maximum width of more than 52 inches. Folding the Capri's rear seats boosts total carrying capacity from 9.3 to 22.6 cubic feet. Equipment levels vary wildly depending on which trim level you opt for, and all will seem a great deal more old fashioned than your mind's eye perhaps recalls. The huge QUARZ (sic) clock that sat at the base of the dashboard surely must have been clunky, even in the seventies! 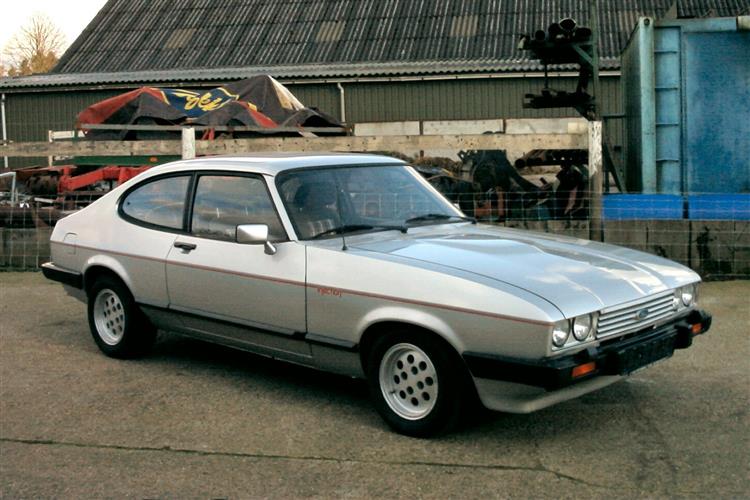