FRESH FROM THE FIAT IDEAS FACTORY? (some text hidden)

Fiat are rarely short of ideas when it comes to appealing small cars and with the explosion in MPV-style utility vehicles, it was only a matter of time before they slotted in a model beneath the Multipla. Although other rivals beat the Punto-based Idea to the punch, few can come anywhere close to its sense of fun and style. A used Idea may be a little tricky to track down, but if you want a small MPV-style vehicle but don't want to forgo a little personality, this is one Idea well worth further investigation.

The Idea doesn't pack a whole lot of history into its curriculum vitae. Basing it on the Fiat Punto, a car whose fundamental underpinnings can be traced back to 1994, didn't seem the most effective way of introducing a fresh face to the supermini-MPV arena but the results were a good deal more effective than expected. The Punto had long been one of the more effervescent cars to drive in its class and the Idea took that 'spirito' and translated it to a class notably lacking such qualities. Two engines were offered from launch, a 1.4-litre petrol and the preferable 1.3-litre Multijet diesel. The petrol was offered in Active, Dynamic and Eleganza trim levels though the diesel was never available in Eleganza specification. In the Spring of 2006, the Idea got a facelift. The more recent cars are easily spotted by their chrome grille and the indicators integrated into the headlamp clusters. Inside, they feature a two-tone dash and lots of chrome detailing. The 1.4-litre engine was revised to reduce noise in the cabin at this stage and two versions of the 1.3-litre Multijet became available, buyers could choose 70bhp or 90bhp power outputs. The last UK market Ideas were sold in the early part of 2007.

What You Getword count: 389

Unlike the Multipla, the Idea doesn't turn heads, its lines resembling a rather sleeker Hyundai Getz. This is no coincidence as Giugiaro is responsible for penning the Getz and also had a hand in the shape of the Idea. Fiat's internal design house contributed to the car and for a car effectively designed by committee, it's a very accomplished effort. It's certainly a good deal easier on the eye than the Multipla, a car that melded design brilliance to hugely unconventional looks and which failed to net the sales in this conservative market that it deserved. Fiat rightly chose to adopt a more sober approach with the Idea, slotting the car into the range somewhere just above the Punto line up. Think of it as being to the Punto what a Ford Focus C-MAX is to a Focus hatch and you'll probably get the gist of it. No, it doesn't offer any additional seats but you can pull some intriguing moves with the seats you do get - thirty-two of them to be precise. The rear seats are split 40-20-40 and can move back and forth either together or individually, prioritising either legroom or luggage space. The seat backs can also be reclined for comfort which is a distinct rarity at this price point. The rear seat backs can fold forward as does the front passenger seat to allow you to carry some very long items. You can even fold all the seat backs flat to create a double bed effect. This is all very well, but it does make one wonder why Fiat - which is partly owned by General Motors - never got access to the even cleverer FlexSpace seating system as used in the Vauxhall Meriva where the seats fold flat to the floor. Three across the back is a bit of a tight squeeze, especially as the firm centre pew looks guaranteed to numb the posterior over longer distances but there's certainly no problem as far as headroom goes, the Idea boasting a roof that soars overhead, prompting one to consider sparking a stovepipe hat revival. The interior otherwise benefits from Fiat's huge experience of building MPV-style vehicles, with a multitude of storage bins, cubbies, pockets and compartments. The dashboard is beautifully styled in a spare, almost minimal fashion with centre-mounted instruments and clean lines. 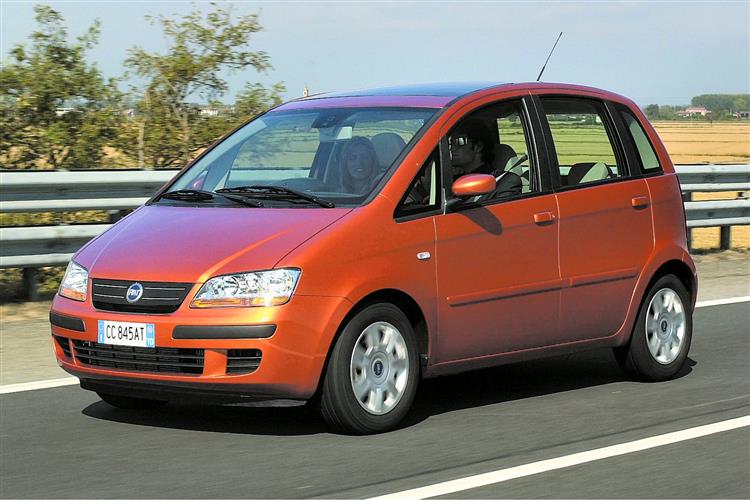