THE ESSENCE OF S (some text hidden)

Few cars receive such uncontested acceptance of their superiority as the Mercedes S-Class. The best hot hatch used to be the Volkswagen Golf GTi, but it's not any more. Opinion is divided as to the best family hatchback you can buy. The McLaren F1 is probably the ultimate sports car. Best car in the world? The Mercedes S-Class saloon, no ifs, buts, or maybes. This is a car that was introduced in 1999 yet when, given the advantage of three years of development, BMW introduced the current 7-Series it still failed to make a significant dent in the imperious Merc's armour. It's a car that has responded to the social climate. Whereas its predecessor, the W140 model, as Mercedes' engineers call the 1991-1999 S-class model, was conceived during the tail end of the eighties and had the same overblown look-at-the-size-of-that-thing feel to it, the latest S-Class is a far subtler foil, yet offers more of everything bar ostentation. As a used buy it's hard to fault. With the market maturing nicely, putting the best car in the world on your driveway is a beguiling prospect.

History may well have judged the 'old' S-Class slightly harshly. When Mercedes announced that it was up for replacement, many industry observers considered the German company's task to be a thankless one. How could this technological tour-de-force be improved upon? Mercedes not only pulled a rabbit out of the hat, they pulled the whole warren, Watership Down and a good percentage of the Hampshire/Berkshire borders. It showcased a number of innovations that were so far ahead of their time it seemed as if Mercedes was showing off. Just as sometimes one gets the suspicion that Honda builds engines that rev to 9,000rpom just because it can, the same suspicion at first attached itself to the S-Class. Here was a car that threw so many electronic tricks, gadgets, aids and whatnots at the car surely some of them would stick and become relevant? As it happened more than a few such gizmos filtered down into mainstream offerings. Now you could have seats that gently massaged you as you drove, air suspension and 'Distronic', a new radar-activated cruise control system that automatically prevented you from driving too close to the car in front. Approach the car with a credit card shaped transponder in your shirt pocket and it would unlock and start the engine, at least until British insurance companies put their foot down on that option. Many of these ideas were unfortunately optional but at least it makes checking out used examples fun. This time round, with criticism of the older 'Der Grosse S-class' predecessors still ringing in their ears, economic uncertainty was not something the designers ignored. So that potential customers could not be accused of wanton wastefulness at a time when the Board was tightening its belt, the new S and CL-classes were considerably leaner and greener. For a start, thanks to engine modifications and the loss of 300kg over the previous model, the latest models were 13 to 17% more frugal with the powerful five-litre V8 versions offering an optional cylinder cut-out system that automatically changed from eight to four cylinders at cruising speeds, improving fuel consumption by a further 7%. We could go on, but you probably get the point. The introduction of the S55 Amg and the S320CDI plugged gaps in the range for a performance supersaloon flagship and a high-tech diesel showcase. Late in this model's life, an S350 V6 model replaced the S320 V6.

What You Getword count: 66

We would say perfection, but there are a few caveats. The boot could be bigger (that's where the increase in interior space came from). There could be a little less plastic and some have asked for steering with a little more feel. Plus of course, you could moan about the sum you need to stump up, but that's par for the course. You want the best. 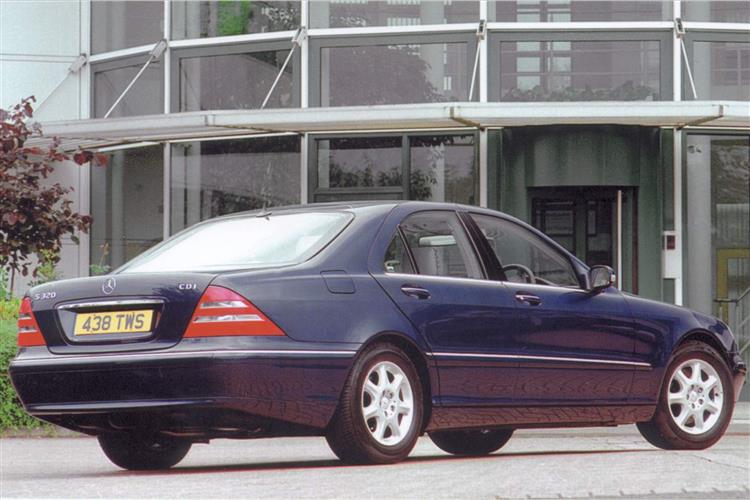