THE CAT'S WHISKERS (some text hidden)

This was the car that proved Ford to be back on track as a company that really could design affordable sports cars that were versatile, yet exciting to drive. Based entirely on the excellent Fiesta running gear, the Puma got its own 1.7-litre engine before adding the Fiesta's 1.4-litre unit as demand increased. Jackie Stewart and the design team really produced a winner here, so residuals have stayed high. Don't worry: pay the extra and own one. It's the finest small coupe ever made.

The Puma was launched in 1.7-litre form in June 1997 and demand was instant. So much so that a Fiesta-engined 1.4-litre model was added in February 1998. Both handled superbly with their tuned Fiesta running gear. Only one 1.7-litre version was offered initially and there was never an automatic option. However, there was a stunning limited-edition 1.7-litre model called the Racing, introduced early in 2000 and likely to be sought-after once they trickle through to the used market. Only 350 were built and they all had an extra 25bhp and a lowered, sleeker-looking body with flared wheelarches finished (only) in Ford Racing Blue. Suspension modifications included a wider track while grippy Recaro seats, a CD player and air conditioning were all standard. In late 2000 the 1.4-litre Puma was replaced by a punchier 1.6-litre model using the same 100bhp engine found in the Focus and Fiesta. In late 2001 a special edition Ford Puma Thunder was announced to mark the final passing of this cracker of a coupe. Going out at the top of its game, the Puma looks set for future classic status.

What You Getword count: 213

Certainly, this car turns heads, with its fared-in headlamps, kicked-up tail and distinctive side slashes. The hunched profile is also surprisingly practical. This is one of the very few small coupes you can buy that can actually seat two adults in the back. It's more likely however, that owners will want to flip the rear seats forward and make use of the generous 240-litre load capacity. The detail touches are pleasing too. Both the fascia and the doors are trimmed with aluminium, while the gear-knob is a single cast lump of the same stuff and the Racing has it on the pedals, too. The instrument dials strike a different chord too - white-faced a la Fiesta Si. There are also thoughtful touches, like the full-sized bottle holders on either side of the two rear passengers' legs and the mobile 'phone receptacle in the centre console. As for equipment, you'll find all the convenience features a quick coupe really needs fitted as standard; electric windows, remote central locking with security alarm, a driver's airbag and a classy hi-fi. There's no provision for a sunroof, but in compensation, the optional air conditioning was, at only £360, one of the most affordable on the market, so many owners specified it. 'Air' was standard on the Racing. 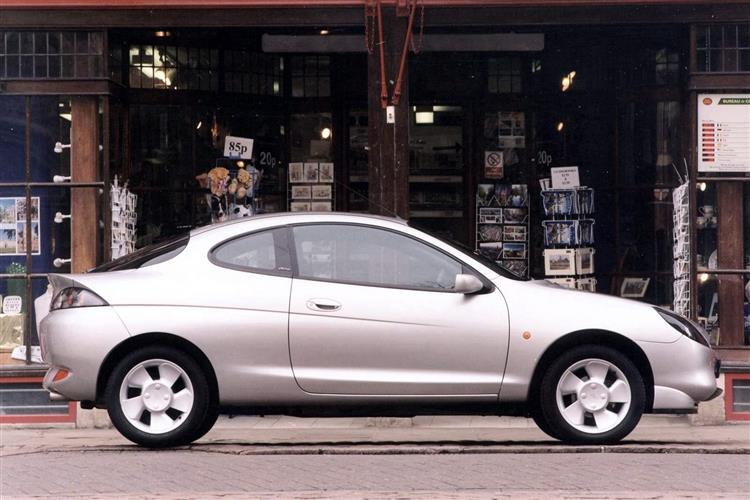