WHY THE LONG FACE? (some text hidden)

The Daewoo Korando is one of those cars that splits opinion. In order to split any opinion however, one must first have heard of it. The Korando is not one of the first names that crop up when drawing up a 4x4 wish list. Those who do know it either love or hate the styling. Like a BMW M-Coupe, Fiat Multipla or Hyundai Coupe, there will be those who think its looks are bold and interesting and those who find it plain ugly. Get past the challenging appearance though and a used Korando makes a lot of sense. It's based on rugged underpinnings and features a pair of powerplants sourced from a German concern called Mercedes-Benz, who are reputed to know a thing or two about engines. Priced attractively from new, the Korando makes a left-field alternative to a Jeep Wrangler, and one that will guarantee a certain exclusivity.

At this stage, you may well be suffering from a gnawing sense of dej vu. That's because the Korando wasn't always a Daewoo. When it was launched in 1997, it was marketed by Ssangyong, who in turn were subsumed by the Korean giant in 1999. It's sister vehicle, the Musso, proved more popular in UK markets and was also subsequently rebadged as a Daewoo. The vehicle didn't stay exactly the same as Ssangyong's offering. Daewoo's designers couldn't resist a little cosmetic fiddling, resulting in new tail lights and door mirrors, with different (but sadly optional) alloy wheels. Take a seat inside, and you'll find new seat fabric and imitation wooden trim for the dash. Under the bonnet, the old Ssangyong diesel engine the Musso had campaigned with was replaced with a Mercedes-sourced five cylinder unit. As a Ssangyong, the Korando suffered from prices considerably higher than the Jeep Wrangler and above some Cherokee models. Prices were cut by more than £2,000 to make the Korando a more tempting proposition. Sales stocks dried up towards the end of 2002 and the Korando was no more.

Although British designer Ken Greenley may disagree, what you get is a somewhat unusual looking, but incredibly tough, 4x4. It will generally appeal to those who need a serious off-road vehicle but find the Wrangler a little bit too 'Marlboro Man', a Land Cruiser too dear and a Land Rover Freelander too 'Cool Britannia'. Daewoo claims the Korando "blends a neo-classical look with a muscular modern image". The effect of this is slightly odd. From the front, the Korando looks for all the world like a pastiche of the original Willys Jeep, with its twin circular headlamps and separate wings, albeit one which has been squashed from either side. The rear is utterly oriental-conventional, though, with a neat, boxy shape. The overall look is of two different concepts melded together. The engine choices available are both well up to the task. Built in Korea under licence from Mercedes-Benz, the 2.3-litre petrol unit is as refined as you'd expect, but the 2.9-litre turbo diesel, also a Mercedes unit, has proved more popular. Daewoo's unique sales strategy has always focused on value for money, so it's no surprise to find the Korando now better equipped. You'll find remote central locking, different (but optional) alloy wheels, a driver's airbag, anti-lock brakes, electronic traction control and semi-automatic air conditioning. Other creature comforts carried over from the previous model include electric front windows, electric mirrors, a height adjustable driver's seat with lumbar support, a tilt-adjustable leather-covered steering wheel, power steering, tinted glass, an alarm and immobiliser plus an RDS stereo radio cassette player. Certainly, despite the three-door-only availability, the Korando makes practical sense. There's ample head and legroom for five people, a split/folding rear seat and a respectable 1254 litres of boot space. Try that with a Jeep Wrangler. 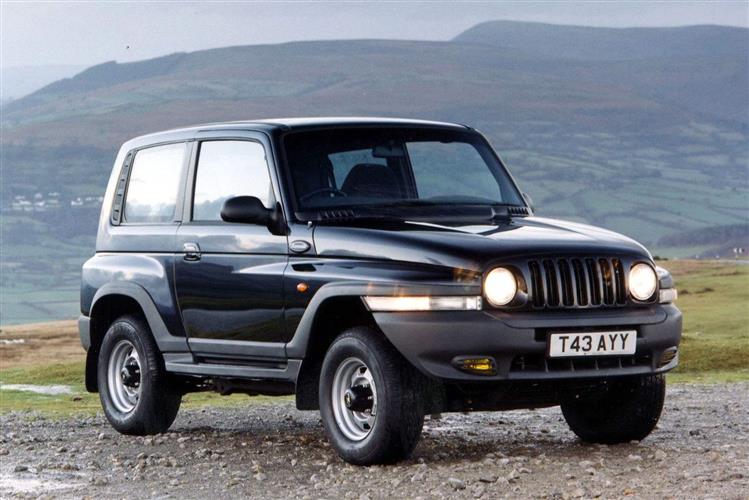