THE GLORIOUS SEVENTH (some text hidden)

Despite its position as the luxury flagship of the BMW range, the 7 Series is a surprisingly easy car to overlook. Aside from the excellence of such opposition as the Mercedes S-class, Audi A8 and Lexus LS430, the 7 series has also had to contend with the enemy within - the BMW 5 Series. Such is the excellence of the 5 Series package that few see the point of forking out for the 7 Series. Whilst it's difficult to criticise the 5 Series in any objective fashion, a case can be made for the Seven. As a technological showpiece it's perhaps ironic that whilst incorporating the cutting edge of vehicle features, many write it off as old hat. A used 7 Series deserves a place on any senior executive shopping list.

Introduced in 1994, the Series three BMW 7 Series brought an ageing but well-respected product line bang up to date. With sleeker styling setting the trend for big executive cars, the 7 Series range designations were a continuation of where the old model left off, although the introduction of the full range was phased over some time. The first cars to arrive in August 1994 were the 730i and 740i variants, powered by three and four-litre V8 engines, developing 218 and 286bhp respectively. A V12 5.4-litre 750i model arrived in September 1995, along with the long wheelbase 740iL model. A 2.8-litre entry-level 728i variant and a 750iL long wheelbase flagship arrived in January 1996. March 1996 saw the deletion of the 730i from the range, its place taken by the 735i, a car which looked to put some distance between itself and the useful six-cylinder 728i entry level model by dint of its 3.5-litre 235bhp V8 engine. At the same time the 740i received the same 4.4-litre engine that was introduced to the 5 Series range. September 1997 saw the introduction of improved airbags across the range, whilst the 750IL gained a standard Trafficmaster system. Bigger changes were wrought in September 1998, when the range underwent a mild facelift. The front headlamps were fitted with a scalloped lower surround, and the rear light clusters were fitted with 'brilliant optic' glass. The famous kidney grille was slightly modified with more pronounced vertical slats. Other improvements were tiny: a chrome strip above the rear numberplate, gloss black sills and valances, illuminated outer door handles and different wheel and paint options. The 735i and 740i V8 models received Dynamic Brake Control (DBC), which maximised braking efficiency in emergency situations. Flagship V12 750i and 750iL derivatives meanwhile, came with satellite navigation systems as standard. From an engineering perspective, changes were restricted to those aimed at improving in-gear flexibility. There's double-VANOS variable valve timing for the entry-level six-cylinder 728i, and single-VANOS for the 735i and 740i V8 variants. The range was replaced by an all-new 7 Series in early 2002.

What You Getword count: 349

There aren't too many surprises with a 7 Series. You know it's going to be beautifully built, great to drive, understated and well equipped - at a price. You'll get all the luxury and gadgets you could possibly want, and then some. Try radar parking-sensors built into the back bumper of some models. Even on the base 728i model you get intelligent traction control (ASC+T), leather seats with electric memory adjustment, alloy wheels, ABS, a six-speaker stereo, twin airbags, an anti-theft system with immobiliser and all the usual executive features. If you really want hi-tech however, see if the previous keeper has delved into BMW's amazing options list. There you'll find everything from steering wheel heating to automatic boot lid operation. There's also a tyre pressure control system and a Climate Comfort windscreen that reduces interior temperatures by up to 10 degrees C. You could even have an Active Seat, which moves either side of the seat squab up and down by 15mm to provide a slow lateral tilt of the pelvis and reduce fatigue and back stiffness. Safety-wise all post 1997 7-Series saloons benefit from what BMW has labelled 'ITS' which, believe it or not, stands for Inflatable Tubular Structure. This potentially life-saving device is a cylindrical air bag that protects the head in an impact. It works in conjunction with the existing driver, passenger and side airbags that are designed to cushion the face and side of the body, respectively. All of which could come in useful if you're the sort of driver attracted to the Seven's sportiness - often lacking in some of its rivals. You can throw the big BMW around and it won't bite back, unlike its predecessors and it's good to know that safety is second to none. Once you've chosen your engine, is it worth choosing manual or auto? The auto boxes are good, and despite the sporting pretensions they suit the 7 Series better than the manual box. Long wheelbase models give a few extra inches of rear legroom, but don't feel as balanced to drive as the nimbler regular cars. 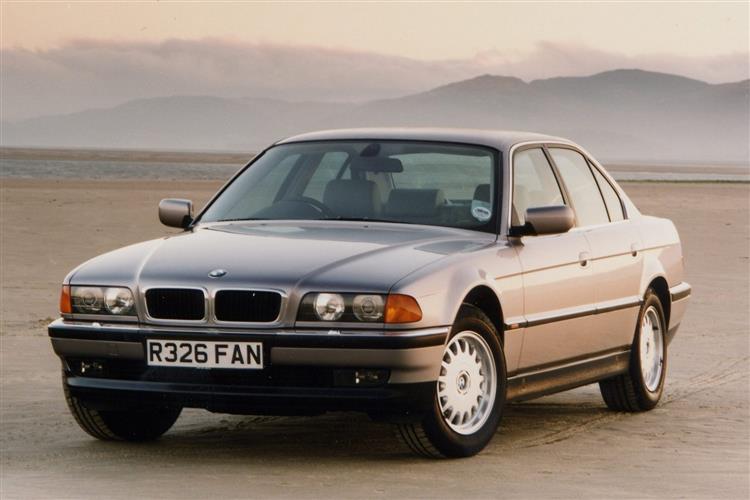