Being environmentally friendly isn't always a whole lot of fun. Who wants to cycle to work when that tends to involve getting shotblasted by passing trucks, dodging suicidal pedestrians, avoiding dozy drivers and braving our notoriously iffy weather? Taking public transport isn't an option for many of us and nor is a scooter. Sometimes a car is the only option and if you are going to drive and you are kept awake at night by the thought of receding glaciers and polar bears frantically treading water, here's the used car for you - the Toyota Prius. Actually it's also a pretty good bet for those who couldn't give a stuff about the environment and just want tiny running costs. A petrol/electric hybrid, some day nearly all cars will be built this way.

Believe it or not, but we've got emissions regulations to thank for this car. With ever stricter emissions targets materialising, Toyota realised that if they wanted to take the lead in progressive engine technology, they needed to act fast. Honda thought the same thing at the same time and their Insight came to market at the same time as Toyota's first generation Prius. Although the futuristic looking Honda garnered all the column inches, the Toyota racked up the sales, a pair of back seats always being a plus in a family car. A high asking price meant that many customers figured out that a diesel Corolla would actually be cheaper to run over three years than a Prius and it wasn't until 2003, when Toyota launched the car we look at here, the second generation Prius, that sales started to ramp up significantly. It's still not what you'd call a volume seller, but this Prius is a better looking and better engineered car than its predecessor. Until hydrogen fuel cell cars make an appearance, petrol/electric or diesel/electric hybrid cars look to be the way forward. A new Prius was announced in 2009 to replace this car.

When the original Prius and its Honda rival, the Insight, were first launched, many were impressed with their technology and green credentials. Using an electric motor to augment or temporarily replace a conventional petrol engine was a great idea. Unfortunately both cars were rather compromised, the Honda by its 'squeezed from a toothpaste tube' styling and impractical two-seater layout and the Toyota by its dull driving manners, cramped cabin and distinctly lacklustre lines. Toyota's second generation Prius changed all that and gave the company leadership in this sector. It was improved in early 2006 with changes to the styling of its headlamps and rear light clusters and a restyled front grille. Inside the cabin, comfort for passengers was enhanced, with an adjustment to the hip point for those sitting in the back. Post-2006 buyers also got smarter upholstery colours, a soft-touch paint finish for the dashboard and the introduction of a leather-trimmed steering wheel across the range. Fresh options for '06-onwards cars included full leather trim, new metallic paint finishes and, on T Spirit models, a rear parking monitor and Intelligent Parking Assist (IPA). The MK2 Prius mirrors the first generation model's technique of being able to run on its petrol engine and then switch to exclusively electric operation when conditions are favourable. Toyota's Hybrid Synergy Drive offers impressive emissions and strong fuel economy performance for a car that in MK2 form competes in the Avensis-sized Mondeo sector. Sometimes the Prius' silent running takes a little getting used to, but under many high-density traffic situations, this car offers totally emissions-free motoring. 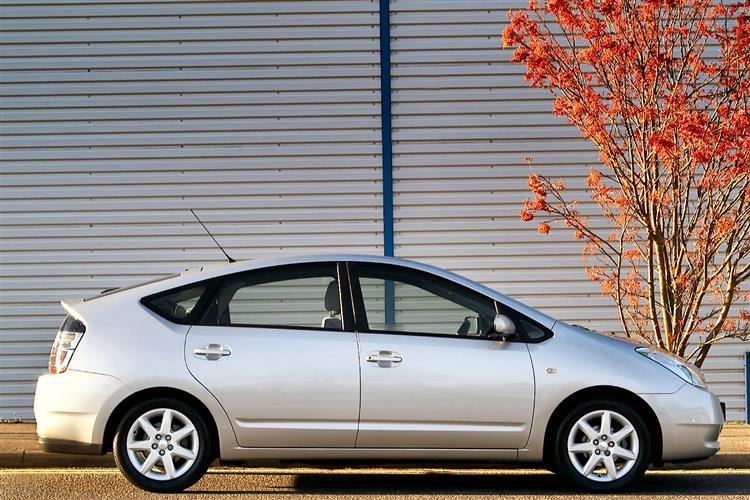