UK buyers have taken a long time to see the merits of the Nissan QX. Perhaps it was tarred by the same brush as its unremarkable predecessor, the Maxima, sales volumes of which were distinctly Minima. The QX has never troubled the likes of the Vauxhall Omega in terms of UK new sales, but as a used buy it represents an awful lot of high-quality metal for the money. Like the Toyota Camry it has largely been ignored by UK buyers whilst selling in shiploads to American customers. It would appear that the British public consider no Japanese firm other than Lexus capable of building a big saloon. It has been Nissan's task to convince us otherwise, and with the QX it wouldn't be unfair to say they have singularly failed. This, it turns out, is more to do with our penchant for a sexy badge than any inherent deficiencies of the QX. Times are changing, though. Flagship models like the Skyline GT-R make the prospect of handing over big money for a Nissan a reasonable proposition. Perhaps Nissan's time will come in the big saloon market. In the meantime there are some great used buys to be had.

The Nissan QX didn't have a lot to live up to. It's predecessor, the Maxima, was renowned as dull, outdated and anonymous. What Nissan needed was a model that would establish their big saloon credentials. The QX was unveiled to a less than overwhelmed UK market in March 1995 and almost instantly became one of those good cars that the domestic market ignored. It wasn't as if the opposition was especially accomplished. Ford's Scorpio had succeeded as the first Ford in years to be shunned by the British public. The Vauxhall Omega was king of the hill, whilst more prestigious offerings from BMW and Audi only offered base models for the price of a fully equipped 3.0 V6 QX. The range upon launch consisted of S and SE models with the 2.0 V6 engine, and Se and SEL trim levels with the 3.0 V6. The 2.0-litre cars were offered with the choice of manual or automatic gearboxes whilst the 3.0-litre models were auto only. In May 1997 a 2.0 SEL model was launched with an automatic gearbox. November 1997 saw a facelift for the QX withside airbags being fitted across the range. As if to underline the QX's luxury pretensions, the wood content noticeably went up in the SE and SEL models. In August 1999 the range was rationalised by the deletion of the 2.0 S variant. This now meant that there were now just SE and SEL trims for both engine types. In September 2000, a new generation QX was announced - though the changes weren't that great. It was now called the Maxima QX, to bring the UK importers into line with other world markets. There was a restyled front and rear around a slightly larger body. The 2.0-litre engine continued unchanged but the output of the 3.0-litre V6 was increased to 200bhp. Three variants were now on offer at lower prices - the manual or auto 2.0SE and the auto-only 2.0SE+ and 3.0SE+.

What You Getword count: 244

The QX is a big, soft, vaguely loveable barge with all of the equipment you'd expect in this price bracket and more thrown in for good measure. If you're going to buy a QX, it's advisable to go the whole hog and have the flagship QX SEL 3.0 V6 available at almost unbelievably low prices. Despite that, you won't go short of gadgets; leather, cruise control, a 10 CD auto-changer and heated electric seats are all standard fare. The same equipment's in the 2.0-litre SEL model, but the price differential is so small between the two models it's worth having the larger-engined car. Most would expect the QX to be unadventurous and bland inside. And they'd be right. The interior quality is exceptional, but the design work lacks the flair and imagination of European rivals. Still, these in turn would be embarrassed by the Nissan's even paint finish and narrow panel gaps. It all adds up to a very restrained design, if not an arresting one. Under the skin however, things are more revolutionary. The rear suspension, for example, has a complex arrangement of locating links. You won't need to know how it works, but you will be interested to learn that it endows the QX with a ride quality that embarrasses any other Japanese saloon short of a Lexus. There aren't many surprises with the big Nissan. It does a competent and reliable job, with the only eyebrow-raising detail being the used price. 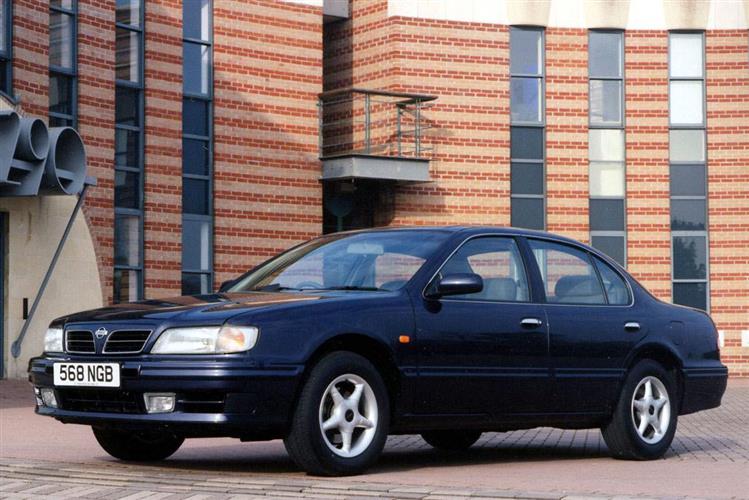