The market for small cars has changed beyond recognition in the last few years. Time was when you either bought a supermini or a family hatch. Those were your sole realistic choices. Then strange citycars started filtering in from Japan at one end of the market and ever smaller MPV-style vehicles assaulted the family hatches at the other end. Nowadays, if you're shopping for a small car you can get something that offers the advantages of both these vehicle types, wrapped up in a smartly-styled body. Renault's Modus is just such a vehicle, one that proved an instant hit and which is available in significant numbers in the used arena.

The UK unveiling of the Modus was, it has to be said, an occasion steeped in high dudgeon. The organisers of the British Motor Show had billed the Modus as their ace card for the 2004 event, a genuine world exclusive but Renault rather skunked them by unveiling it at the Madrid show the week earlier. The Spanish connection is apposite, as the Modus is built in Valladolid, just up the A6 from Madrid. Renault used the rather grandly titled Alliance Platform B (which to you and I is the Nissan Micra chassis) as the basis for the Modus. The Modus was an extremely important vehicle for Renault. Fully one-third of all cars sold in Europe hail from the small car segment and back in 2004, with both the Clio and Twingo models looking rather old, Renault needed a fresh challenger. Only available in five-door guise, the Modus looked to make a convincing fist of things, especially when it comes to the vital 'first five seconds' the period of time in which the majority of car sales are either won or lost. Renault had access to a whole array of decent powerplants, had established their five-star safety credentials before almost any other manufacturer got on board and priced the Modus keenly. It couldn't fail. It didn't. The basic proposition has remained unchanged since launch with the addition of Oasis and Maxim special editions in summer 2005. A mild facelift in the summer of 2006 brought clear lens light clusters front and rear. Door mirrors were also introduced that featured integrated indicator lights and all models received body-coloured bumpers. By this stage, the Quickshift5 clutchless gearbox was available on the dCi 86 diesel engine.

The first thing that strikes used buyers is the Modus' modernity. Compared to many other conventional supermini designs there's something very refreshing about its cleanly-integrated styling and sheer versatility. The interior is exceptionally airy, the huge amount of glass up top and the low waistline brightening the cabin. The driving position feels more like a mini-MPV than a conventional hatch and the centrally-mounted instrument panel allowed the designers to make a feature of the smooth sweep of the fascia, again giving a clean, minimalist look. The sunroof system is unusual. The rear panel is fixed while the forward one can be operated by a one-touch switch. In addition to the usual tilt position, there are also three possible slide positions. The manual roof offers two side-by-side panels which can be tilted or removed completely and stowed in a bag behind the rear bench seat. Renault dubbed this sliding rear bench the 'Triptic' and it features a folding centre section. With a sliding range of 170mm, the rear of the car can be optimised for passengers, luggage or a compromise between the two. In two seat configuration, it can be set to any one of four positions whilst in three-seat mode, two positions are available. It can also be folded down to form a completely flat floor area. The novelties don't stop there either. The Modus' rear hatch can open much like a conventional hatchback (that is, hinged at the top) or the lower section can open using hinges at the bottom, thus making it easy to access the luggage bay in cramped conditions. Should you ever get a puncture in the Modus, you'll appreciate the sheer amount of design ingenuity in the way Renault have engineered the spare wheel system. When it comes to safety, the Modus adopts a belt and braces philosophy. It benefits from a Bosch 8.0 anti-lock brakes with brakeforce distribution, ESP electronic stability control with understeer control and a tyre pressure monitoring system. The Modus is also available with additional cornering lights - which was a world first in the small car segment - double-distance xenon headlamps, together with an automatic range adjustment system. Passive safety is impressive, reflecting Renault's expertise in this area. The Modus structure includes numerous strengthened crumple zones, designed to work in harmony with the restraint mechanisms of Renault's third-generation System for Restraint and Protection (SRP3). Other safety features of the Modus are its six airbags - including two adaptive front airbags - and front safety belts with load limiters and double pretensioners. 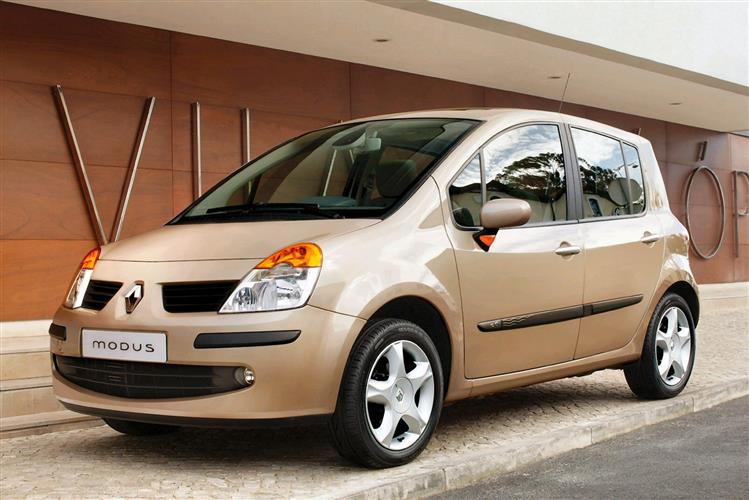