THE ENERGETIC FORM OF GOLF (some text hidden)

Levelling criticism at the Volkswagen Golf isn't an easy thing to do. There have been ups and downs through the years and different generations but little to leave a serious stain on its pedigree. If you absolutely had to pick fault with this family hatchback icon, you might focus on the fact that, for all the buttoned-down competence, it isn't the most exciting thing to look at. Waiting in the wings to cut off any such an angle of attack is the Scirocco coupe. It's a Golf with added attitude.

Golf coupes were by no means a new idea when this Scirocco was launched in 2008. The first car to carry the Scirocco name (derived from Sirocco, the Italian for wind, if you're interested) was launched in 1974 and based around mk1 Golf mechanicals. It was superseded in 1982 by a heavily revamped Scirocco mk2 which shared the same platform. The Scirocco didn't disappear from the Volkswagen range until 1988 when the Corrado arrived on the mk2 Golf platform to replace it but when production of that car ceased in 1996, so did the burgeoning dynasty of cars combining Golf basics with coupe bodywork. Though the Golf GTI models were on hand to satisfy Volkswagen customers looking for something sporty, they have never been cars with the power to transform pedestrians into gawping fools with a simple drive past. Volkswagen went without a real head-turner for more than a decade before the long-awaited revival of the Scirocco in 2008. This Scirocco is based on the oily bits of the Golf mk5 which aren't a million miles away from those employed in the mk6 car. It was unveiled to much appreciation at the 2008 Geneva Motorshow, having been strongly hinted at by the IROC concept car which starred at Paris two years earlier. Launched with the Golf GTI's 2.0-litre TSI turbocharged petrol engine and the option of standard or GT trim, the Scirocco was soon bolstered by the arrival of a 2.0-litre TDI powerplant in 140 and 170bhp guises. The engine range grew further with the inclusion of the 160bhp twin-charge petrol engine which made up for a smallish 1.4-litre capacity by bolting on turbocharger and supercharger. The flagship 2.0 TSI unit was upgraded from 200bhp to 210bhp in 2009. In 2010, an entry-level 1.4 TSI petrol engine was introduced with a turbocharger and 122bhp. At the opposite end of things, Volkswagen launched the Scirocco R high performance model. This used the 265bhp version of the 2.0 TSI engine that was previously seen in the Audi S3 but unlike the four-wheel-drive Golf R which debuted around the same time, it stuck with the front-wheel-drive layout of the standard Sciroccos.

The styling is a big part of the Scirocco's attraction. The car is poised, shapely, modern and suitably far removed from the Golf it shares its platform with. The powerful rear haunches and the dramatic roofline that drops to meet them still stand out while the thin grille serves to visually widen the car. Volkswagen isn't known for its stylistic innovation but this is one model where the marque hit the nail on the head. The Scirocco cabin cocoons its occupants in familiar Volkswagen design cues and build quality. The cocoon will be on the tight side for adults in the rear seats but the two front berths provide comfort, space and a well judged driving position for the person behind the three-spoke sports steering wheel. The interior is airy and light, and the optional panoramic sunroof further emphasises the feeling of spaciousness. The Scirocco is quite practical for a sports coupe but a good few notches less so than a three-door Golf. There's a reasonably wide boot aperture which opens up 292 litres of luggage space. Fold the split rear seats down and you've got 755 litres. The Scirocco features four, individual sculpted seats finished in either cloth or leather. The sports seats aren't just restricted to those up front - the contoured rear seats feature integrated headrests to offer plenty of support. Proportions for this car are classically short, low and wide although the dimensions betray its reliance on Golf mechanicals. The vehicle measures 4,256mm long, 1,404mm high and 1,810mm in width. 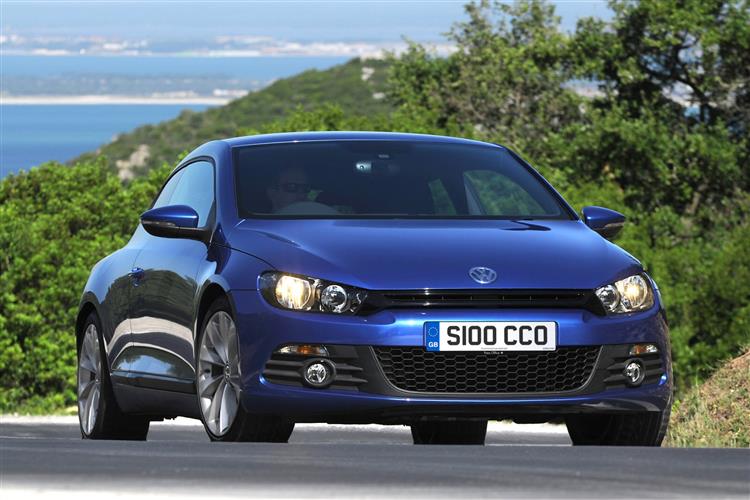