You probably have very firm views on whether the Mercedes Viano even counts as an MPV at all. There will doubtless be a large percentage of you who feel that this is nothing more or less than a glorified airport shuttle but keep an open mind and the Viano becomes a whole lot more than that. As a new buy, it's tough to make a case for the Mercedes as a practical family vehicle. It's just too expensive for most household budgets but as a used proposition it suddenly makes all kinds of sense. How often have we lambasted MPVs for having seats for a big family but not the corresponding luggage capacity. Seems the solution to that particular problem was right in front of us all the time.

The Viano's way was paved by the V-Class, a van-based MPV that had been with us since 1996. It never sold particularly well in this country. After all, the V-Class had a good deal too much Vito van in its genes to really duke it out with cars like the Renault Grand Espace and the Chrysler Grand Voyager. Despite an interior that makes the Millennium Stadium feel claustrophobic, it just wasn't, well, grand enough. Its long-awaited successor, the Viano was expected to really hit the opposition for six. After all, Mercedes had all the ingredients to make a stunning MPV. Great engines, state of the art production facilities, a track record for innovative design and packaging all backed up by some redoubtable marketing muscle. And yet when the first pictures of the Mercedes Viano fell on the desks of motoring journalists the length and breadth of the country, you could almost hear jaws clunking onto pine veneer. It was another van. The press release started bullishly but within the first paragraph it mentioned the two different wheelbases available and three different body lengths - prime evidence of a commercial vehicle background. Despite our disappointment at Mercedes not building the Mercedes of MPVs, the reasons behind the development of the Viano are actually very sound. It's only here in the UK that we adopt a snobbish attitude to this type of vehicle. In continental Europe, models like the Volkswagen Caravelle Limousine and the Mercedes V-class have been enormously successful. Forget about the commercial origins and you end up with a vehicle that makes an interesting used buy. In October 2004, the 218bhp 3.2-litre V6 engine was replaced by a larger V6 unit with 231bhp.

What You Getword count: 242

Two trim levels are available, Trend and Ambiente. Whichever model you choose, common sense practicality comes as standard. The ergonomics are impressive and the dash-mounted gear lever is a nice touch. The passenger compartment features a rail system that allows for a wide variety of seating configurations. Fore and aft adjustment and flexible repositioning of the individual seats and benches is easily achievable while both the seats and the benches can be folded flat or tilted fully forwards. The 25mm hole pattern in the floor means that the seats can also be rotated to face in almost any direction, opening up the possibility of a cosy face to face seating position. If you want to cut a dash on your street, the Viano may well pull up short. It does look a little swoopier than a V-class, especially around the front end, but the silhouette is still a good deal more commercial than classy. Still, the front is nicely rounded and there are some rather extravagant swage lines along the flanks. The rearmost side window profile is also quite neat, but if it's smart aesthetics you're after, the Renault Grand Espace shows the Mercedes how things are done. The Mercedes counters by offering a more interesting range of engines and added versatility as well as that cavernous interior. Those looking for unparalleled practicality in a big MPV will celebrate the fact that Mercedes hasn't been tempted to follow a more ostentatious route. 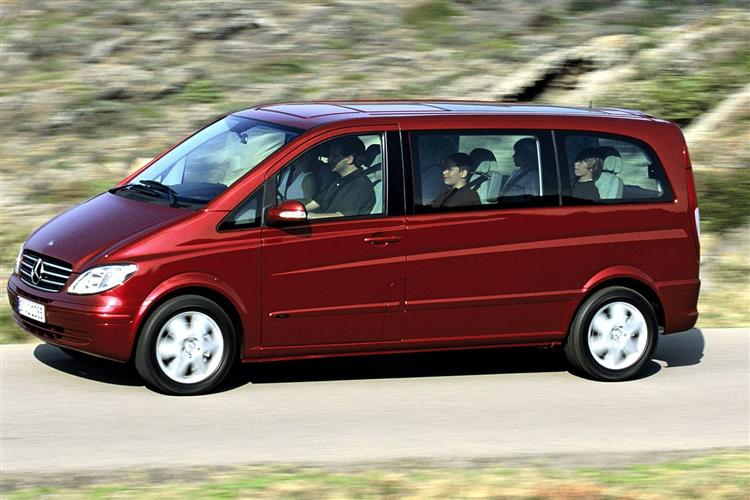