The fact that the original Mercedes SLK was on sale for fully eight years without significant alterations gives some clue as to how advanced it was when it came to market back in 1996. The 21st century was a problem the SLK was starting to find very hard to come to terms with and by 2004, the car felt rather off the pace. Cue the latest generation SLK, a car that takes a giant leap forward in terms of quality, driver involvement and all-round sophistication. Mercedes had built its reputation on delivering cars that needed no excuses. The SLK showed the German giant was back on form. Used examples are starting to appear in meaningful numbers and despite solid residuals, they're well worth tracking down.

Mercedes launched the second generation SLK with two models. The value pick was the supercharged SLK200K which made a very assured entry-level proposition, originally priced as it was at £29,032. Pitched for a while at the head of the line up was the SLK350, which originally carried a £37,602 sticker price. This would probably have sufficed for many manufacturers but Mercedes were keen to further flesh out the SLK range and the next addition launched was the rocket ship SLK55 AMG, a car that debuted in October 2004, offering a power proposition that Porsche couldn't match. A mid-range model, the SLK280 was quietly slipped into the SLK portfolio in September 2005.

The basic shape of the SLK was left unchanged with the MK2 changes, the characteristic short boot and long bonnet creating a more aesthetically pleasing profile than most of the other hard top convertibles, many of which have rather odd proportions. It's a bigger car than it predecessor, the body being 72mm longer and 65mm wider, which means more space inside for beefier occupants. The roof mechanism has been widely copied and now no longer amazes bystanders but folds neatly into the boot in 22 seconds. The swivelling rear window means that with the roof folded there's now a good deal more space available in the boot - a notable issue with the old car. The SLK is a car that's associated with engineering novelty and Mercedes didn't disappoint with this version. The AIRSCARF neck-level heating system delivers a warm flow of air from the headrests, enabling SLK owners to drop the roof without experiencing the chill fingers of the typical British climate. This system monitors road speed and temperature and adapts the fan speed accordingly to ensure a toasty 'scarf' of hot air. Safety provision was well and truly revisited too, the MK2 SLK featuring a 40 per cent increase in the use of high tensile steel alloys. For the first time in an SLK, Mercedes used adaptive airbags which deploy in two stages according to the severity of the accident. Twin stage seat belt load limiters also feature and head/thorax airbags respond to side impacts. A sensor triggers the side airbags and both belt tensioners during a vehicle rollover, with solid roll-over bars behind the seats also helping to prevent injury in the unlikely event of such an accident. The styling is a good deal more aggressive in its detailing than the cute first generation car. The distinctive arrow-like tapering of the front bonnet is reminiscent of both the McLaren Formula One racer and the Mercedes SLR McLaren supercar. Twin exhausts, a deep front spoiler and purposefully blistered wheel arches give the SLK a welcome dose of attitude, beefed up by the SLK55 AMG which features additional vents in the front spoiler and bigger alloy wheels. Cars like the BMW Z4, the Audi TT Roadster, the Porsche Boxster and the Honda S2000 forced the SLK to up its game. Despite the MK1 model selling over 308,000 examples worldwide, the market moved on and more dynamic and purposeful designs were required. The second generation car fulfils that particular brief very well and Mercedes even resisted the temptation to hike prices unreasonably. 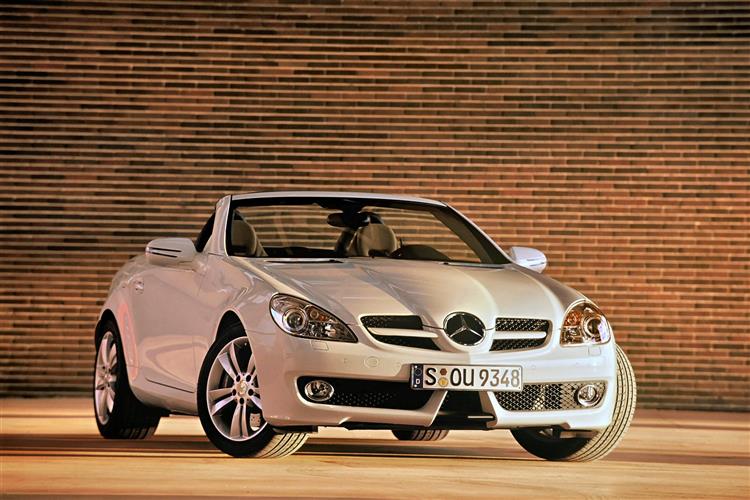