The Mercedes SL has long stood for refined elegance and continent crushing ability but it was only with the introduction of the 2002 model year car that the Sport part of the SL's 'Sport Leicht' designation could justify its existence. The previous model was neither sporty nor lightweight and although the later car still doesn't so much tip the scales as total them, Mercedes have made the effort to endow the car with some genuine dynamic prowess. Opt for one of the more powerful versions and you get a car with supercar performance but with accoutrements that would do most luxury saloons proud. The best SL to date? Most would agree.

Mercedes opened the book on what they codenamed the R230 series SL as they meant to go on, with a pair of powerful V8 engined models landing in UK dealerships in March 2002. The 306bhp SL500 opened proceedings at a cool £67,610 with the rocketship 476bhp SL55 AMG model topping the tree at £88,860. Critics instantly raved about the SL's combination of pace and panache but this was just the first tranche of models that Mercedes were to unleash. An entry-level 245bhp V6 SL350 followed in early 2003 and by July a monster 493bhp SL600 twin turbocharged V12 had been unveiled. This was duely followed by the ultimate SL, the SL65 AMG with its 612bhp output and a pricetag in excess of £145,000. A series of changes were introduced in early 2006, including a revised front bumper assembly with three large cooling air intakes integrated and a matte silver finished grille with three broad slats. The interior was smartened-up as well with changes also being made to the engines. The SL500 was increased from 306bhp to a brawny 388bhp and the SL350 went from 245bhp to 272bhp.

Whereas big Mercedes SEC coupes from the early eighties now look a bit blousy, the SL retained a classical purity of line. Replacing such a car was never going to be easy, Mercedes designers precariously perched beneath the historical baggage of Damocles. First impressions were disappointing. Advance press pictures from the 2001 Frankfurt Motor Show gave the impression that the car was little more than a mild reskinning of the old model with some fussy detailing. The reality could hardly be more different. Designers have a particularly clumsy term for describing a car that just works in the metal - 'front to rear cohesiveness'. The SL has this quality in spades. Every curve melds into the next, flop lines and swages teasing, pouring and sweeping light from one plane to the next. The balance between slavishly unimaginative retro styling and the preservation of traditional; design cues explains some of the more contrived punctuations but the overall effect is supremely elegant. The roof mechanism has stepped forward a generation from that of the SLK, lifting or lowering in a mere 16 seconds with a panel fit only bettered by the ALVIN deep sea submersible. The interior quality is what we've come to expect from Mercedes - premium price rather than Fisher Price, although the car looks far better specified with aluminium cabin detailing than optional lumber. The 'conjoined twin' front headlamp theme continues in the cabin with neat wheel-mounted controls whilst the main fascia dials excise neat arcs from the minor gauges. 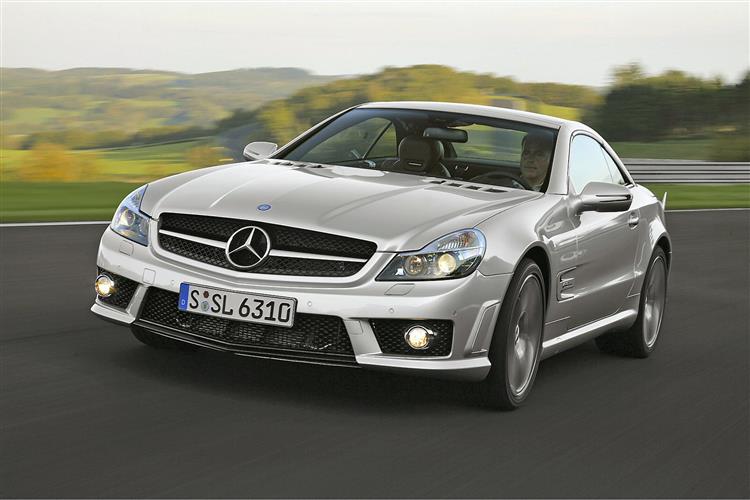