The F-TYPE. It's not only a sportscar - it's a Jaguar sportscar: the difference is important. Don't expect a racetrack refugee - but don't expect a luxury GT either, the kind of car sporting fans of the brand previously had so often to be satisfied with. Think instead of what an Austin Healey or a Triumph TR6 might be like re-interpreted for the modern era, a coupe or, as in this case, a roadster designed very much for the road. A machine you can't help but want to drive - and drive hard. That's more than ever what a F-TYPE can be, thanks to widespread improvements that have broadened its appeal.

What do you expect a Jaguar sportscar to be? Charismatic? Memorable? Classically elegant? The company's F-TYPE model claims all these attributes. It's a little bit special. And it's changed quite a bit since we first saw this Convertible version back in 2013. First with the launch of an alternative fixed-top Coupe body style in 2014. Then with the announcement of manual transmission and AWD a year later. A frantic flagship SVR V8 derivative arrived in 2015 with supercar-style performance, just before the introduction of a minor facelift, an uprated V6 engine option and, perhaps most significantly, in mid-2017, an entry-level four cylinder variant. Finally, at the end of 2019, there was the wider reaching facelift that created the version we're going to look at here. With this, the aging supercharged petrol V6 mid-range unit was finally pensioned off and a de-tuned version of the top supercharged V8 powerplant inserted into the range in its place.

Speed and drama aren't lacking here. Even the base 300hp four cylinder P300 F-TYPE variant makes 60mph in just 5.4s en route to a top speed that has to be limited to 155mph. It even sounds great - or at least it does if you engage the standard Active Sports exhaust anyway, though some of the aural fireworks are artificially enhanced by the stereo speakers. For some F-TYPE folk though, this car just won't feel right with a mere 2.0-litres beneath the bonnet - and we can understand that. These people may also want the option of AWD, which you can't have on the P300. You can pay extra for that extra tractional system though, with the next powerplant up in the line-up, which is no longer a 3.0-litre supercharged V6, Jaguar having pensioned that aging unit off in favour of a new 450PS version of its classic supercharged V8. This fiery powerplant develops a prodigious 580Nm of torque from just 2,500rpm and makes 60mph in just 4.4s on the way to 177mph. Should that somehow be insufficient, the wild F-TYPE R variant continues at the top of the range with a 575PS version of the same V8, an AWD-only model which covers off that benchmark sprint in just 3.5s en route to 186mph. You can of course hear it all so much better if you switch from the Coupe bodystyle to this Convertible, which can raise or lower its hood in just 12s at speeds of up to 30mph. Inevitably, if you go for the four cylinder derivative, the exhaust melody isn't quite as addictive But making this car fast was a very small part of making it great. After all, Jaguar's old XK sportscar was certainly quick, but only really ardent fans of the Coventry brand would ever have considered one in the same breath as, say, a Porsche 911. Can this F-TYPE at last do better? Before driving this one, we had our doubts - and in some ways still do, though there's certainly lots about the dynamic repertoire of this car that we really like. Take the steering, an electrically-assisted rack that turns out to be direct and feelsome in communicating what's going on beneath you. Equally good is the paddleshift ZF Quickshift auto gearbox, which F-TYPE folk now have to have, the four cylinder model's optional manual 'box having now, sadly, been discontinued. This auto lacks modern twin-clutch technology, but it's a rapid fire system with eight closely stacked sporting ratios and, for the V8s, has now been further optimised to constantly keep the supercharged engines in the sweet spot of the power band. 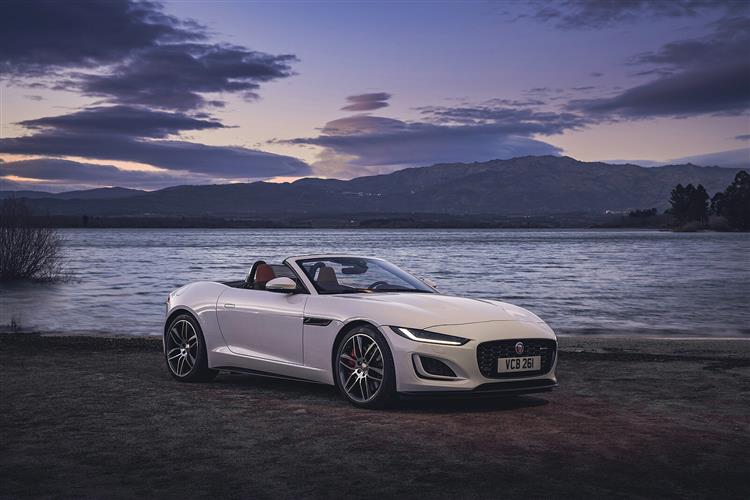