The third generation version of the mid-sized Mercedes Vito van has been revitalised by the introduction of this all-electric eVito model. It goes only 92 miles between charges but that might be fine for some urban operators, who'll like the high quality, strong residuals and impressive standards of safety and media connectivity.

We expected the eVito to set a fresh standard for all-electric vans and had good reason to do so, having quite recently reviewed the EQV, the all-electric version of that V-Class MPV we mentioned earlier, whose design this Mercedes van shares. The EQV has a 100kWh battery that develops a 201hp total output and can offer a claimed driving range of up to 213 miles between charges - the kind of thing that's currently unknown amongst all-electric LCVs. That's a pricey confection though, pricier than Mercedes thinks operators will be prepared to stomach, so the eVito instead gets a battery less than half the size of its People Carrying counterpart - 41kWh - linked to an electric motor with a far more modest 116PS output.

You'd expect an all-electric Vito to be uber-refined, which of course it is. But you might also expect it to go further on a single charge than it actually does. The inevitable result of using a relatively small 41kWh battery is quite a limited 92 mile driving range, though this could fractionally rise to 103 miles in exclusive town use. That's not only rather limited compared to this model's Mercedes EQV People carrier cousin; more to the point, it's rather limited compared to direct EV mid-sized van segment rivals. To give you some class perspective, comparable 50 kWh all-electric versions of the Vauxhall Vivaro, the Citroen Dispatch and the Peugeot Expert manage around 143 miles on a single charge. Those who take the plunge into eVito ownershp will quickly need to assume mastery over the various provided drive settings if they're to maximise the range possible. There are three eVito drive programs - 'C', 'E' and 'E+' - which alter the drive system to cut power use (the top speed is limited to 75mph anyway) while optimising ancillaries to boost efficiency. At the same time, you'll be using the provided steering wheel paddles to cycle through four brake recuperation levels, which are badged 'D-', 'D', 'D+' and 'D++'. With 'D-', you get so much braking resistance when you come off the throttle that you hardly ever have to use your keft foot. At the other extreme, in 'D++', the eVito will coast with virtually no off-throttle resistance at all. 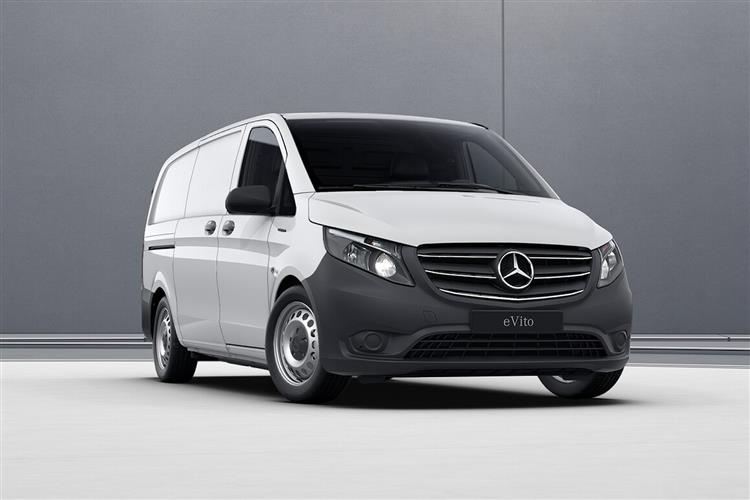