SETTING THE F-PACE (some text hidden)

The F-PACE has taken Jaguar in a bold and different direction and this updated version is a further step forward. With an assertive new exterior, a beautifully crafted all-new interior, latest generation Pivi Pro infotainment and the choice of in-line four and six-cylinder engines including PHEV and MHEV technology, this latest Jaguar F-PACE is more luxurious, connected and efficient.

If there's one type of car that epitomises this period in motoring history, it's the SUV. So many buyers desire them and Jaguar wants a slice of this action. As a result back in 2015, the British company brought us its first ever model of this kind, the F-PACE, complete with high-riding driving position, four-wheel drive and even some decent off-road ability. Five years on, it was updated to create the car we're going to look at here. Lower range models are pitched against desirable versions of prestige-branded compact SUVs like BMW's X3 and Audi's Q5, while quicker F-PACE variants must match up against the likes of benchmark performance models in this segment like Porsche's Macan and AMG versions of the Mercedes GLC. All of this requires Jaguar's mid-sized SUV to be more than merely very good: it has to be brilliant. Is it? Let's find out.

The F-PACE is still arguably the best car in its class to drive, helped by its lightweight aluminium underpinnings; it's certainly the best to ride in. But much has changed beneath the bonnet. The engine range here has been completely overhauled and only one of the powerplants now on offer - the base 250PS P300 four cylinder petrol unit - fails to be in some way electrified. All the diesels now feature the brand's MHEV mild Hybrid tech. There are a couple of 2.0-litre diesels, the D165 (163PS) and the D200 (204PS). Plus a 3.0-litre six cylinder diesel, the D300 (300PS). Mild Hybrid tech also features in the mid-range petrol model, the P400 (400PS), which has a six cylinder 3.0-litre engine. The priciest variant, the PHEV Plug-in Hybrid P400e version, uses a 2.0-litre petrol unit with 404PS and 640Nm of pulling power mated to a 105kW electric motor powered by a 17.1kWh battery. 62mph from rest in the P400e takes just 5.0s and when fully charged, the car can offer up to 33 miles of WLTP-rated all-electric driving range. If you want to go faster, there's also a supercharged V8 petrol-powered SVR performance flagship model offering 550PS. This features a revised torque curve that raises peak output to 700Nm and powers the F-PACE SVR to a 178mph top speed. Heightened torque output and a new Dynamic Launch function cut the 0-60mph time by three-tenths of a second to just 3.8 seconds. The SVR also gets a new steering rack with SV calibration and retuned dampers deliver a more connected driving experience, with enhanced ride refinement. All engines are paired with Jaguar's eight-speed automatic gearbox, which can be controlled using the steering wheel shift paddles for added driver engagement. All-wheel drive is standard across all F-PACE models and Intelligent Driveline Dynamics provides rear-wheel drive biased performance, with the ability to vary torque to individual axles almost instantly depending on conditions. The chassis has been updated to support the introduction of the new electrified engines And there's an updated version of the 'JaguarDrive Control' suite of driving modes. Here, 'Comfort', 'Eco', 'Rain-Ice-Snow' and 'Dynamic' modes adapt the F-PACE's steering, transmission, throttle and (when specified) Adaptive Dynamics settings. 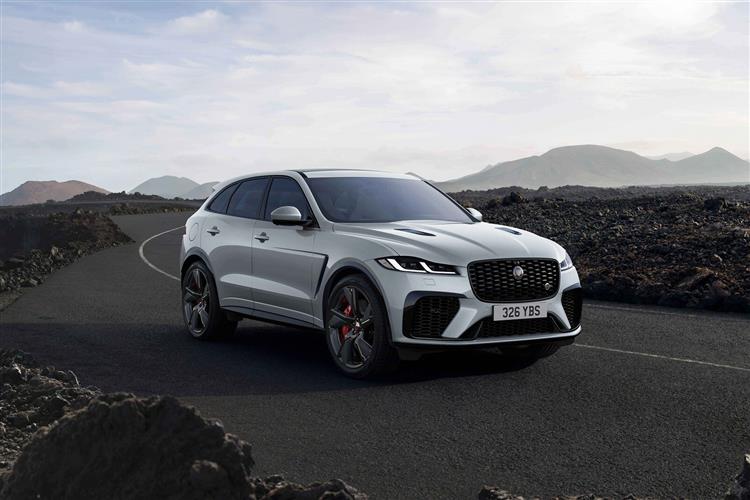