UPPING THE F-PACE (some text hidden)

Jaguar's mid-sized luxury SUV has proved to be an impressive contender. But how does it stack up in pricier F-PACE D300 3.0-litre Diesel guise? Jonathan Crouch takes a look.

The F-PACE took Jaguar in a bold and different direction and has proved to be crucial to the brand's future, expanding its sales and taking on key rivals. It brings a well-judged compromise of class, performance and capability to the luxury mid-sized SUV segment that provides a tempting alternative to the established German players in this sector. Let's try it in potent 3.0-litre diesel F-PACE D300 guise.

If there's one type of car that epitomises this period in motoring history, it's the SUV. So many buyers desire them and Jaguar wants a slice of this action. As a result, the British company brought us its first ever model of this kind, complete with high-riding driving position, four-wheel drive and even some decent off-road ability. The F-PACE was launched in 2016, then revised four years on to create the car we look at here in D300 V6 diesel form.. With this car, there should be the potential for the kind of properly driver-orientated handling dynamics that a Jaguar SUV really ought to have. And will need if it's to realise marketing ambitions that in price and performance see tough and well established competitors being targeted. Quicker F-PACE variants like the 3.0-litre D300 diesel model we're trying here must match up against the likes of benchmark performance models in this segment like BMW's X4. That'll require Jaguar's SUV to be more than merely very good: it has to be brilliant. Is it? Let's find out.

Jaguar wants this F-PACE to be a class leader when it comes to driving dynamics in this segment, an objective helped enormously by its lightweight aluminium architecture. Further aids in this regard include torque vectoring to maximise cornering traction and a defiantly rear-biased AWD system that never diverts more than 50% of its power up-front, a process that happens in milliseconds as soon as the first signs of wheel slip are detected. The 3.0-litre D300 diesel variant we're testing here uses a 300PS 3.0-litre V6 unit that puts out 650Nm of torque, powers you to 62mph in 6.1s and tops out at 143mph. Impressive figures, but possibly rather more than you actually need - in which case, the lesser four cylinder 2.0-litre Ingenium diesel variants beckon. All Jaguar diesels now use the brand's mild hybrid electrified tech. This 3.0-litre derivative comes only with AWD and an 8-speed auto gearbox. Change ratios for the auto transmission are one of the things that can be tweaked via the settings of the 'Jaguar Drive Control' system, a set-up that also adjusts steering feel and throttle response to suit the way you want to drive. If you want to go further and make the 'Jaguar Drive Control' settings more fundamental in altering the driving character of the car, then you'll need to spend extra on the optional 'Adaptive Dynamics' adjustable damping system your dealer will want to tell you about. 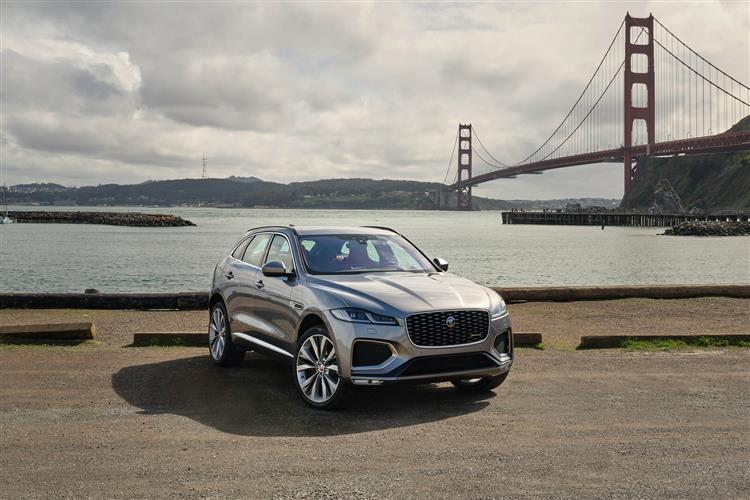