The Mercedes-AMG E 53 4MATIC+ Coupe offers something rather special. Jonathan Crouch drives it.

The Mercedes-AMG E 53 4MATIC+ Coupe is a rare kind of performance sporting car. Not only can it sprint to 62mph in under 4.5s to the accompaniment of an emotive soundtrack but it also has a relatively efficient mild hybrid engine and can properly seat four people. It all delivers a pretty special and rather different Grand Touring experience. There's a sense of class, quality and style here that makes this car unique at its price point.

It's been a long time since we've had a Mercedes E-Class that was a proper AMG-fettled serious driver's car but this, we're told, might be it, the Mercedes-AMG E 53 4MATIC+ Coupe. It's not the first Mercedes-AMG version of the current generation E-Class Coupe; this '53' variant directly replaces an E 43 4MATIC version of this model. That had a V6 engine and 367hp. Here though, you sense that Mercedes' Afalterbach luxury division has got a lot more serious about developing this car. There's a change to inline six cylinder power and a power hike to 435hp. At the same time as this E-Class variant future-proofs itself with a switch to mild hybrid technology. Let's take a look.

Previously, there was quite a gulf between the two engines that the Mercedes-AMG sub-brand uses for larger cars made by the Three-Pointed Star. These being the V6 '43' unit and the 'blood and thunder' 4.0-litre V8 of the ballistic '63'-series cars. You still can't have an E-class Coupe (or for that matter, an E-Class cabriolet) with the V8 engine, but this E 53 model's in-line six cylinder 435hp unit delivers a lot of the performance that unit might provide for this body style. Together with a vastly more acceptable set of running costs thanks to the newly integrated mild hybrid tech. But you don't want to know about all that - not in this section anyway. You want to know how fast this E 53 Coupe goes and whether it's just a bit of a boat that goes very fast in a straight line but can't do a lot else. As has been the case with AMG-engined E-Class Coupes of the past. Well it isn't that. Come to this car and expect it to have the scalpel-sharp handling responses of a similarly priced but slightly smaller C 63 Coupe and you'll be disappointed. But it's more everyday-usable than one of those thanks to an AMG DYNAMIC SELECT driving modes system and the addition of AMG RIDE CONTROL version of the Mercedes AIR BODY CONTROL air suspension system. Plus there's 4MATIC+ AWD, a 9-speed AMG Speedshift TCT paddleshift auto gearbox and an AMG Performance exhaust for an authentic sportscar soundtrack. It all makes this car certainly quite dynamic enough to take on a direct class rival like a BMW M850i Coupe. Rest to 62mph takes just 4.4s and the top speed has to be artificially restricted at 155mph. It's also a more rewarding thing than the other car in this category that uses hybrid technology (albeit in full-hybrid rather than, as in this case, mild hybrid form), the Lexus LC 500h. 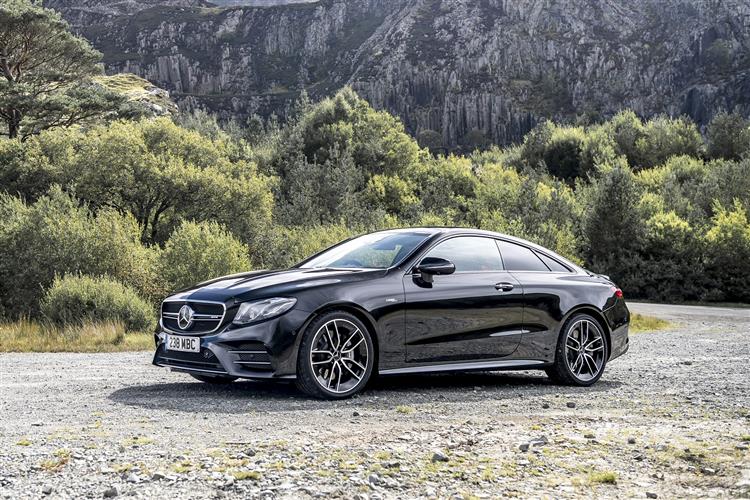