E FOR EFFORT (some text hidden)

Though the Jaguar XE has been around since 2015, it's entirely possible that as a buyer of a compact to mid-sized premium sports saloon, you might not have yet come across it. If that's the case, allow us to introduce you to this revised version, which is smarter, quieter and classier inside than the original and remains appealingly different to the usual German suspects in this segment. On paper at least, it now seems to have the design, technology and ambition necessary to succeed in this sector, with the dynamics of a BMW and the luxury of a Mercedes, plus all the efficiency and connectivity modern business buyers now expect. It's a surprisingly strong contender, especially in D200 diesel form.

At its original launch in 2015, Jaguar's XE, the brand's smallest saloon, was tasked with selling in bigger numbers than any Jaguar before it. It didn't. And the British brand has been scratching its head wondering why. They've responded with this significantly revised version, which offers more luxury, technology and value. Or, if you want us to put it another way, basically, it's the car we should have had right from the start. The question is though, whether all this will be enough to rejuvenate the XE's fortunes. It does, after all, have to contend with brand new versions of BMW's 3 Series and Mercedes' C-Class, plus substantially revised Audi A4 and Alfa Romeo Giulia models. In short, further headway in this segment will be difficult to achieve. Can this improved XE manage it? We tried a D200 diesel variant in a bid to find out.

There's only one diesel engine now on offer to XE buyers - just the mid-level D200 derivative we're looking at here. Which isn't of much consequence because it's the variant that most buyers in search of such a unit would have chosen anyway, this 2.0-litre Ingenium powerplant now featuring the brand's latest mild hybrid tech and offering 204PS, enough to get you to 62mph in 6.9s en route to 146mph. Like all versions of this Jaguar, this one only drives through an 8-speed ZF auto transmission; sales of manual gearbox versions of the original XE models were vanishingly small, so that option's been deleted too. When you compete in the same class as the BMW 3 Series, it's a measure of real confidence to bill your contender as "the driver's car in the global mid-size saloon segment". Yet that's exactly what Jaguar has done and a closer look at the XE reveals the reasons behind their bullishness. Right from the off in an XE, you get to experience what Jaguar's engineers call the '50 metre feel' - the all-important first impression that any vehicle conveys about the way it will drive. This one feels sharp, purposeful and, from the very start, beautifully composed over our country's terrible tarmac. Part of that's due to a much more sophisticated suspension system than most competitors use, a so-called 'Integral Link' set-up that's particularly good on a route with quick, sweeping, open bends, over which this car sweeps imperiously from turn to turn, soaking up undulations with perfect poise. 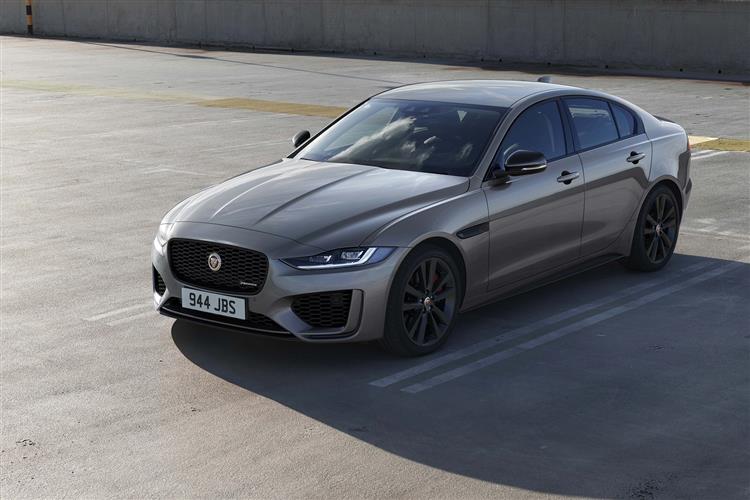