There's nothing quite like the Mercedes-AMG GT 63 4MATIC+ 4-Door Coupe, thinks Jonathan Crouch

With this Mercedes-AMG GT 4-Door 63 4MATIC+ model, the Three Pointed Star maker's Affalterbach sub-brand has produced its first unique four-door design - and it's quite an achievement. Here, you're going to see the industry's most detailed film on this hugely impressive flagship AMG contender.

Once merely a tuning specialist, AMG, the sporting division of Mercedes-Benz, is now increasingly turning its hand to its own unique cars. Here's the third one we've seen so far, the GT 4-Door Coupe. The AMG brand is scattered liberally around the Mercedes range these days, variously designating either a sporty trim level or, if you've gone further, a bespoke-engined hot version of whichever of the Stuttgart maker's products you've settled on. But AMG has only ever developed three cars that are uniquely its own - and all have been very special indeed. The gullwing-door SLS of 2008 was the first of these; the Mercedes-AMG GT 2-Door Coupe of 2014 was the second. This third design though, represented the Affalterbach maker's biggest challenge yet. It's one thing to make a sportscar handle engagingly. It's quite another to achieve the same thing with a 5-metre-long, 2.1-tonne luxury 4-door model. Particularly when it must channel up to 639hp to the tarmac. Welcome, to the Mercedes-AMG GT 63 4MATIC+ 4-Door Coupe.

It's savagely quick of course. The top 639hp 'S' model's 4.0-litre twin turbo V8 generates 900NM of torque and gets to 62mph in just 3.2s en route to 196mph, while the alternative 585hp standard variant is almost as quick. The acceleration times assume you're using the provided 'RACE START' mode in the 9-speed SPEEDSHIFT MCT AMG auto gearbox, which comes with perfectly-sited steering wheel paddleshifters and software that blips the throttle on downshifts to the evocative accompaniment of popping and banging from the switchable AMG Performance exhaust system. What's even more impressive than the straight line speed though, is the way that the various chassis and drivetrain systems have been developed to interact in such a sophisticated manner. There are plenty of these, including torque vectoring and handling features developed specifically to improve the cornering stability and traction of this car, including an actively locking rear axle differential and rear wheel steering that turns the back wheels slightly in the same direction as the fronts at higher speeds. Another thing you don't get on a GT 2-Door is this car's 4MATIC+ 4WD system, which usually channels drive to the rear wheels, with those at the front called into action on the occasions (which will be frequent if you're pushing on) when all that torque twist is too much for the rears to handle on their own. The 'S' variant also features an extra 'Drift' mode for track use that disconnects the clutch from the front wheels to allow for lurid, power-sliding circuit drifts. 'Drift Mode' only works in the most extreme setting that this model's incorporated 'AMG DYNAMIC SELECT' drive programme system can offer, a 'RACE' mode that's also exclusive to the 'S' variant as part of an 'AMG DYNAMIC PLUS' package that additionally includes dynamic engine mounts. The other selectable 'DYNAMIC SELECT' options - 'Comfort', 'Slippery', 'Sport' and 'Sport+' - are common to both GT 4-Door models and as you would expect, influence throttle response, gearshift timings, steering, exhaust note and stability settings. Plus they include integrated 'AMG DYNAMICS' handling programmes, which have a lot to do with this car's sublime chassis and drivetrain interaction. The balance here has clearly been chosen to favour track behaviour rather than ordinary urban or highway use. But this model is still an eminently usable commuting tool or trans-continental luxury GT when you need it to be. 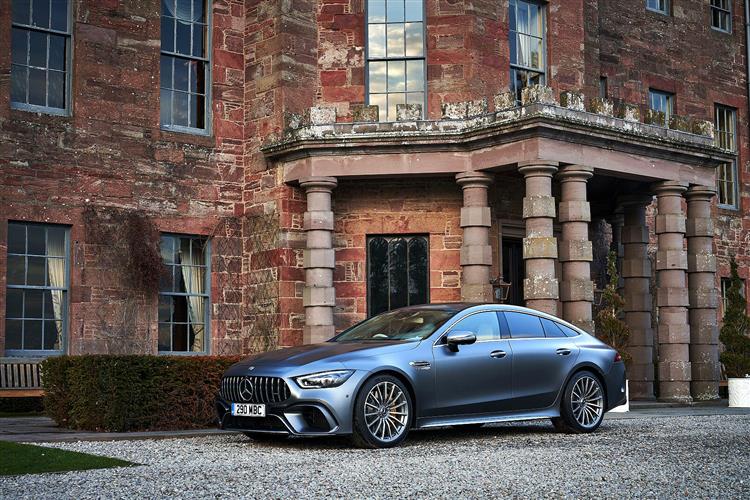