A FINE WHINE (some text hidden)

Ferrari's Portofino makes a great noise. And the brand's entry-level sports car has other draws, as Jonathan Crouch discovers.

Ferrari's most accessible sports car has been treated to a root and branch revision and has re-emerged as the Portofino. Now featuring a more powerful and fuel-efficient 3.9-litre twin-turbocharged V8 engine and a much-improved interior, this contender is prettier as well. Ferrari's biggest seller is about to stoke up even stronger demand.

What might an entry level modern Ferrari be like? In the California, launched in 2008, we got our answer. It wasn't one of Maranello's most universally loved models but it met its brief to widen the reach of the brand. Out of every ten California customers, just three had owned a Ferrari before, the rest purloined from brands like Mercedes, Bentley and Aston Martin. What the California didn't achieve though, was its goal of hitting 1,000 annual sales on a regular basis. Not even when it was usefully updated to 'California T' status in 2014. So the brand has tried again at creating an entry-level everyday-usable sports car, bringing us this Portofino model. Like its predecessor, it persists with the kind of folding metal top that everyone else in the industry except Mercedes has now ditched. And there's essentially the same 3.9-litre twin turbo V8 beneath the bonnet, though it's been extensively worked over.

What exactly does 'everyday-usable' really mean? By Ferrari standards, the old California model was fired up more than twice as often as other Ferrari models, according to the brand. It's tempting to think of this Portofino as merely a mildly re-worked version of that model but the truth is actually quite different. For a start, though the 3.9-litre twin turbo V8 might be much the same in basic engineering concept, it features new pistons and controls, plus a modular turbo manifold. Essentially, it's now very close to the unit you'll find in the 488 GTB. All these changes have upped outright power to 592bhp, 38bhp more than the previous California T could muster. Perhaps more importantly, this powerplant is surrounded by a completely fresh framework, specifically a body that's considerably lighter and 35% stiffer than the California's. As a result, the Portofino has a power-to-weight ratio vastly better than that of a direct rival like Aston Martin's DB11 Volante. It's faster too, the 62mph sprint possible in just 3.5s en route to 199mph. You'd want a Ferrari to sound awesome: this one does, thanks to an electronically-controlled bypass valve in the exhaust which makes the engine note quieter or louder depending on the drive mode you've selected from the brand's usual 'manettino' rotary switch on the steering wheel. As you'd expect, the driving settings configure the powertrain, the dampers, the steering and the stability control. Plus there's a separate - and very useful - 'bumpy road' setting that allows you to have all the systems set for maximum attack but the dampers set to soft. We think likely owners are going to find themselves using this rather a lot. 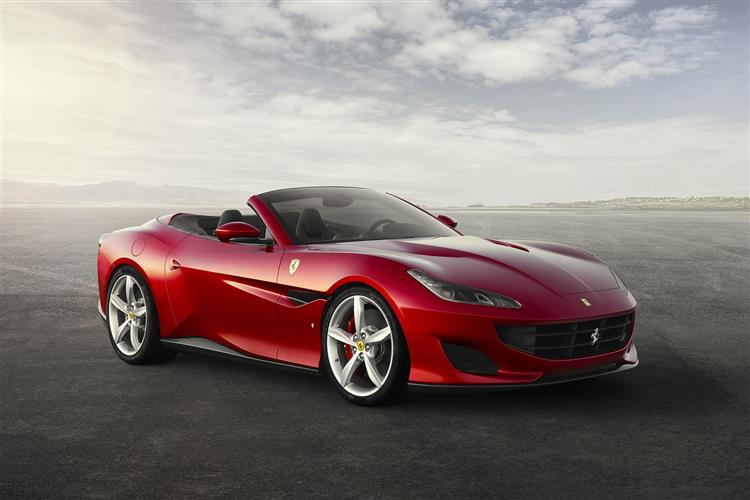