SHOOTING FOR THE STARS (some text hidden)

Mercedes-Benz once again surprises us with the CLA Shooting Brake, which in this second generation form is a small estate with big aspirations. Jonathan Crouch reports.

Mercedes-Benz certainly hasn't played safe with this second generation CLA Shooting Brake, giving it the sort of bold, exciting styling that characterises its four-door Coupe stablemate. Look a little closer and you'll realise that the slinky roofline is a clever slight of hand from the stylists and there's real practicality on offer.

Like its predecessor, this second generation CLA Shooting Brake aims to offer a stylised interpretation of what a small estate should be. The original version was launched back in 2015 to sell alongside the stylised four-door coupe CLA; this MK2 model arrived in the Summer of 2019 and delivers a high-tech cabin that Mercedes reckon takes screen and infotainment technology to the next level. It gets a slightly bigger boot too.

Mercedes markets this car as a 'sporty' alternative to its more conventional C-Class Estate. The CLA Shooting Brake's sporty styling leads you to expect that. Though this car shares its chassis, steering and braking architecture with A and B-Class models, it does get its own suspension set-up, with various changes made to improve comfort and make it a bit less crashy over poorer surfaces. There's torque vectoring to help with the handling and 'Direct Steering' to sharpen things up at the helm. The range kicks off with CLA 180 and CLA 200 variants that both use a 1.3-litre petrol engine co-developed with Renault and are respectively capable of producing either 136hp and 200Nm of torque or 163hp and 250Nm. There's also a plug-in hybrid, the CLA 250e, which uses a 1.33-litre engine mated to a 15.6kWh battery with a system output of 218hp and an all-electric driving range of up to 49 miles (NEDC). Beyond that lies another petrol-powered front-driven variant, the CLA 250, which uses a 2.0-litre engine and can generate 224hp and 350Nm. You can also talk to your dealer about a 190hp diesel-powered CLA 220d variant. All petrol models use a 7G-DCT seven-speed automatic transmission (it's an 8-speeder in the diesel). There are also two high performance Mercedes-AMG 2.0-litre turbo petrol models, the CLA 35 4MATIC (with 306hp) and the top CLA 45 S 4MATIC+ (with 421hp). 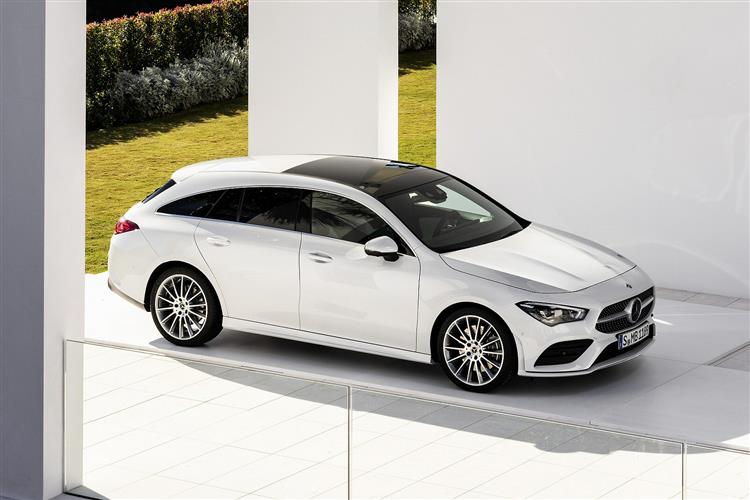