The classical Roadster. This, apparently, is what we have here in the form of the third generation version of BMW's Z4. Jonathan Crouch drives the sDrive20i version.

BMW knows a thing or two about roadsters and this third generation Z4 is one of its best. It may not be the sharpest car in its class to drive but on the right day, in the right mood on the right road, you may not care. The engines are efficient and willing, the looks are stunning and the feeling you get behind the wheel still makes you feel twenty years younger. This, it seems, is a Z that might be very hard to catch. Let's try the base sDrive20i version.

Ah yes, the Z4; the model that some said wasn't quite a true BMW sports car last time out - the head of the company's performance 'M' division didn't think the old MK2 model was quite dynamic enough to get a full 'M' status. Some say it isn't quite a true BMW sports car this time round either, but usually for a different reason - the fact that it's shared its development with a Toyota (the new GR Supra). We might also mention the fact that it isn't even built by BMW, the Munich maker having farmed production out to Magna Steyr in Austria. Lots of issues then. Affordable modern-era BMW roadster models have always faced them. This time though, with this 'G29'-series model, there are grounds for believing that this Z4 could actually give us the really serious driver's experience its predecessors struggled to deliver. It's grippier, has a lower centre of gravity, a considerably wider track and, because the previous model's heavy old metal folding roof has been dumped this time round, there's also the promise of perfect 50:50 weight distribution. Let's put this MK3 model Z4 to the test in base sDrive20i form.

Sporting BMWs may have been inseparably associated with six cylinder engines down the years but the key powerplants on offer in this 'G29'-series Z4 line-up squirt fuel into the quartet of cylinders boasted by a TwinPower Turbo 2.0-litre unit that's offered in two states of tune. It's the 197hp sDrive20i variant that I tried, but this engine is also available in a 258hp state of tune in the alternative sDrive30i variant. You can talk to your dealer about a manual version of the base sDrive 20i, but otherwise, all Z4 variants come fitted with an 8-speed Steptronic Sport auto gearbox with gearshift paddles. Rest to 62mph in the '20i' takes 6.6s en route to 149mph. You're probably going to want to pay extra for adaptive damping. The way the suspension interacts with the steering, the throttle and the differential is key to the way this car responds dynamically, so proactive use of the provided drive modes is crucial if you're pressing on. Do that and you'll find that this car lacks the razor-sharp steering responses of a rival Porsche 718 Boxster but the helm is quick and accurate, which in combination with superb front-end traction means that corners can be attacked with surprising confidence. Which is the kind of driving experience you'd want a proper roadster to be able to deliver. Is this one 'fun'? Well it can be - and that's a big step forward in Z4 development. 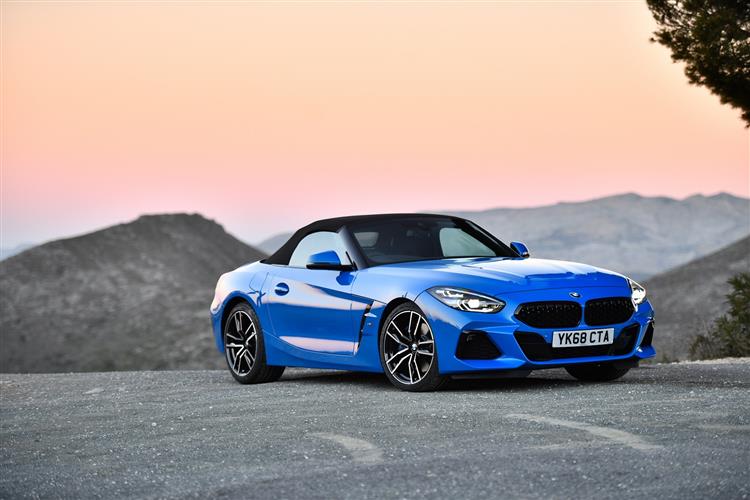