With the Tourneo Courier, Ford has reverted to van-based underpinnings for its smallest MPV. Jonathan Crouch drives it.

Sometimes, something simpler is more sensible. Take the turn of the century trend to create small People Carriers with bespoke car-like design. All you actually need as a starting point for such a vehicle is a small van. And if you agree and happen to be looking for a very compact MPV, you might be interested in this one, the Ford Tourneo Courier.

Back in 2014, Ford launched its smallest-ever van, the Transit Courier. It was a design able to provide a perfect base for the creation of a supermini-sized People Carrier, but that option wasn't initially taken up because the Blue Oval brand already had one of those in its range, the Fiesta-based B-MAX. That car, launched in 2012 and notable for a clever design that completely dispensed with a central B-pillar, was ultimately a casualty of the market's fashion-led switch away from MPVs to SUVs and was quietly deleted in 2018. Rather than replace it with something else styled from scratch, thoughts at Ford's design department turned back to the Transit Courier and its suitability as a base for a little People Carrier. Which is why we've got this car, the Tourneo Courier, launched in mid-2018 as part of a rejuvenated range of van-based Ford Tourneo People Movers. Despite the LCV underpinnings, there's no lack of sophistication here. Especially under the bonnet where family buyers choose between Ford's latest 1.5-litre EcoBlue diesel or a 1.0-litre EcoBoost petrol engine enhanced with cylinder deactivation.

It's always quite refreshing to drive a car whose only purpose in life is to get from A to B as affordably as possible. So there are no pretensions here - no dynamic expectations that might be disappointed. The underpinnings are derived from the old sixth generation Fiesta but the engines are borrowed from the current one, which means that Tourneo Courier buyers choose either a 1.5-litre EcoBlue diesel unit or the 1.0-litre three cylinder EcoBoost powerplant I tried. Both engines put out 100PS and must be mated to a freshly-designed 6-speed manual gearbox. The EcoBoost variant I tested will be the choice of most, who'll approve of the fact that this unit's efficiency has been enhanced by the additional of cylinder deactivation. Ride quality over broken surfaces isn't as smooth as I'd like, but things settle down at highway speeds. At that point, the petrol engine's buzzy thrum subsides a little too, though you do still get quite a lot of wind and road noise from the boxy shape and the high profile tyres. As you'd expect from a car with such an expansive glass area, this MPV is simplicity itself to manoeuvre. The boxy shape makes it easy to see where the corners of the car are, the wide door mirrors are a commercial carry-over you'll be glad of and the expansive windscreen gives you a far wider field of vision than you'd get in a supermini. In fact, a Tourneo Courier delivers far more of a lot of things than you'd get in a supermini, but that won't prevent it from being a relatively rare sight on our roads. 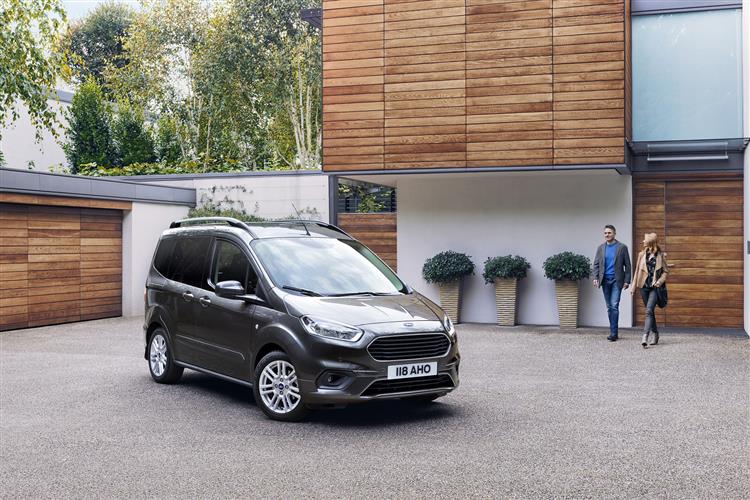