The Cayenne large luxury SUV was the car that turned around Porsche's fortunes and it's a car that still manages to set standards in its segment in this third generation form. It's smarter, faster, more efficient and impressively advanced. Best of all, it can reward you at the wheel in a way that no other rival can. Especially in 4.0-litre V8 Turbo form...

Where once, Porsche would talk about their Cayenne luxury SUV being a 'family sportscar', 'a five-seat 911' and so on, that mantle now sits more comfortably with the brand's smaller Macan crossover model. The Cayenne these days now has more in common with the company's 'Gran Turismo', the Panamera, sharing much of that executive contender's engineering, including its new-tech active anti-roll bar set-up, its rear axle steering system and its three-chamber air suspension, all of it co-ordinated by Porsche's freshly-developed '4D-Chassis Control' central network system. You sense that all of that technology's certainly going to be needed if a genuinely sporting conveyance is to be made out of something this big and heavy. And it's an objective that'll be further aided by this MK3 model's adoption of a shorter version of the hi-tech MLB-Evo platform that it shares with Bentley, Audi and Lamborghini. Under the bonnet, there's a range of completely new engines - including the 4.0-litre twin turbo V8 fitted to the Turbo model we're testing here - all of them mated to a new 8-speed PDK auto gearbox. Add in a vast improvement in media connectivity and a completely re-designed interior that claims to set fresh class standards and there's certainly the potential for this to be the most sophisticated SUV that Porsche has ever made.

From a dynamic driving point of view, the Cayenne has always redefined the kind of car a large SUV can be and this third generation version continues to push those boundaries. When you're pushing on through the turns, it's able to seek out grip and traction you'd think a car of this sort simply wouldn't be able to find, delivering it with the kind of poised body control that you'd normally expect would be foreign to a 2.2-tonne SUV. And it's all further embellished by Porsche's expertise in steering feedback and a bespoke clutch-based four-wheel drive system that can send more torque rearwards, more of the time. Ah yes - torque: there'll certainly be plenty of it, especially in this potent 550hp twin-turbo V8 Turbo version. As with all the Cayenne powerplants, this one's mated to a ZF 8-speed auto gearbox. This top engine's now a 4.0-litre unit and is a little less aurally charismatic than 4.8-litre V8 previously used by the Cayenne Turbo but it's usefully faster in the mid range. Sixy two mph from rest flashes by in 4.1s and if you happen to commute to the office on a stretch of derestricted autobahn, you can reach 177mph flat out. Spend extra on the various elements of dynamic gadgetry available for this third generation model - things like the three-chamber air suspension system, 'PDCC' active anti-roll bars, 'PTV Plus' torque vectoring and rear axle steering - and through the turns, you can mitigate Newton's laws to a surprising extent. 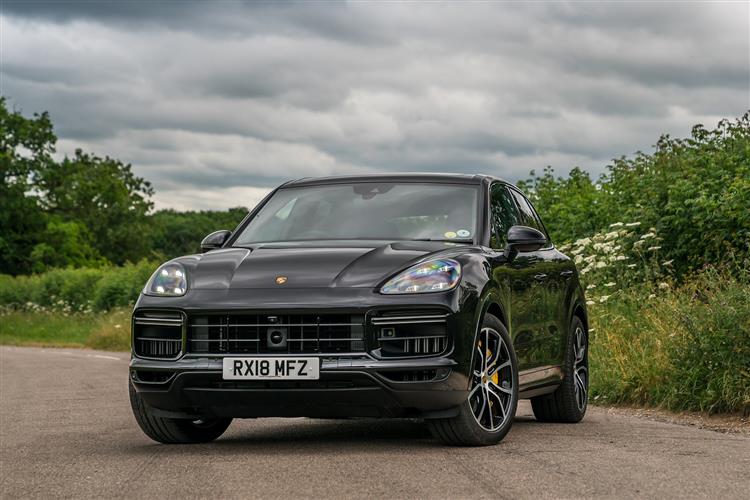