If you like the idea of Mercedes' third generation CLS four-door coupe, it's most likely that it'll be the top 400d diesel version you'll be targeting. Jonathan Crouch drives it.

Let's see if this is you. You've done pretty well in life and you've earned the right to a prestigious executive car. You'd rather like a Mercedes-Benz - but not a dull-looking one like the guy over the road drives. If that three-pointed star could be mounted on the bonnet of something with proper rear seat space that cuts more of a dash - something a little more cutting edge - you'd be interested. And you'd be Mercedes CLS target market. Here, we look at the top 400d 4MATIC diesel version of the third generation model.

It sounds a simple concept: combining the elegance and dynamism of a coupe with the comfort and functionality of a saloon. This car though, was the first to perfect it - the Mercedes CLS. It's been around since 2004, with a MK2 model launched in 2011 and the third generation version we're going to test here introduced in 2018. This MK3 model CLS has brought us more eye-catching styling and a new range of engines, while promising an interior to die for that for the first time can seat up to five people. Plus there are big progressions in media connectivity, camera-driven safety technology and autonomous driving capability, all borrowed from the current E-Class. There's no unusual 'Shooting Brake' estate body style option this time round, but this car does share much with the desirable Mercedes-AMG GT 4-Door Coupe that the brand will offer you if the top fastest petrol-powered CLS variant somehow isn't quick enough or exclusive enough for you. There'll be nothing though, quite like a CLS if you have your eye on a full-sized Executive segment saloon but want something a little more original and distinctive. Time to put this third generation 'C257'-series model to the test in top '400d' diesel 4MATIC form.

The CLS may be billed as a Coupe but its driving demeanour is very much geared to long distance luxury. Lengthy highway journeys are aided by superb refinement, optional autonomous driving tech and supple suspension that can be further improved if you pay extra for 'AIR BODY CONTROL' air suspension. The CLS is a little more portly in third generation form, primarily due to the standard fitment of 4MATIC 4WD, which Mercedes deems necessary to match what rival Audi A7 Sportback and BMW 6 Series Gran Turismo models are offering in this segment. As a result, you'd be wise if budget permits to ignore the entry-level four cylinder petrol and diesel variants and instead go straight for the in-line six cylinder engines this third generation model was launched with. Most will want the 3.0-litre diesel, available with 282hp in the CLS 350d 4MATIC or 340hp in the CLS 400d 4MATIC variant we're trying for this test. Like all models, it gets 9-speed auto transmission and Mercedes' 'DYNAMIC SELECT' driving modes system. Twisting secondary roads don't really sit in this car's comfort zone - the steering's not especially feelsome but the brilliant ride quality and superb refinement offer ample compensation. 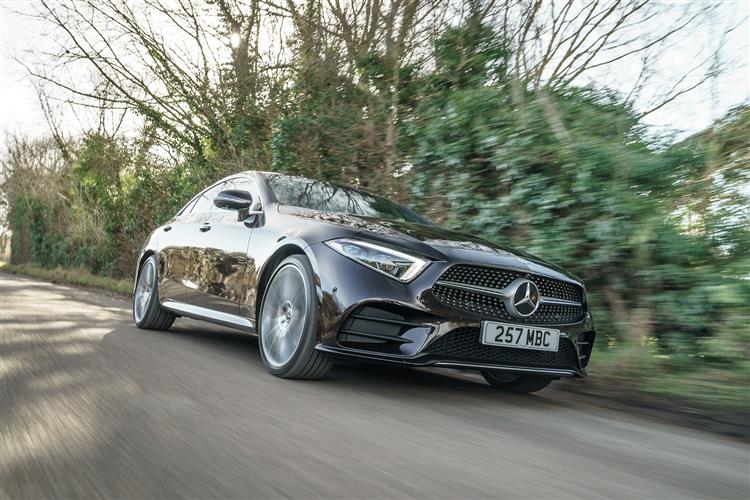