HIT FOR SIX (some text hidden)

This much improved third generation Mazda6 has been designed to shake up the medium range Mondeo segment. There's no great revolution here; just a gentle evolution of the things that made this model's predecessor so appealing - smart looks, engaging drive characteristics and decent running cost efficiency. It's got the talent to give some better-selling cars in its class quite a lot to think about.

Back in 2002, the very first Mazda6 was a game-changer for the Japanese brand. Prior to the launch of this model, this Hiroshima-based maker was known merely for bringing us family cars that were reliable, well equipped - and rather dull. Now it would be overstating the case to say that this Mondeo-sized medium range model changed that perception overnight - but not by much. Sharky-looking and good to drive, all it really lacked was a little refinement and polish. The second generation version of 2007 added that, but at the expense of the characterful, dynamic approach of its predecessor. Some of that returned with the third generation model, launched in 2012. This featured Mazda's clever 'SYYACTIV' technology which dramatically improved running costs and made this model not only good enough to prise customers away from mainstream rivals but even to make buyers of lower order German compact executive saloons think twice. It only needed a smarter cabin and a bit of extra technology, both things apparently delivered by this much enhanced MK3 model. Let's check out what's on offer.

As before, most Mazda6 models will be sold with either 2.0-litre petrol or 2.2-litre diesel SKYACTIV powerplants. The 2.0-litre SKYACTIV-G petrol unit has been enhanced with redesigned intake ports, revised pistons and a more advanced fuel injection and cooling set-up. The alternative 2.2-litre SKYACTIV-D diesel puts out 150PS as before in its base form, but generates 184PS (up from 175PS) in its highest state of tune. There is a completely new engine in the line-up, but it'll be a rare sight on our roads, a 2.5-litre petrol SKYACTIV-G unit borrowed from the US-market CX-9 SUV. It's paired with a SKYACTIV-DRIVE six-speed automatic gearbox. Some effort has gone into improving ride comfort and handling dynamics too, the car benefitting from suspension fine tuning and component upgrades. Bump stop characteristics have been revised, the front dampers have increased in diameter and rebound springs have been added, all resulting in smoother vehicle behaviour and improved ride quality. In addition, the steering knuckles have been lowered to ensure a more precise response to subtle steering wheel actions. Extra noise insulation, improved aerodynamics and a special vibration-absorbing material been added to the centre tunnel and the roof lining should all improve refinement. 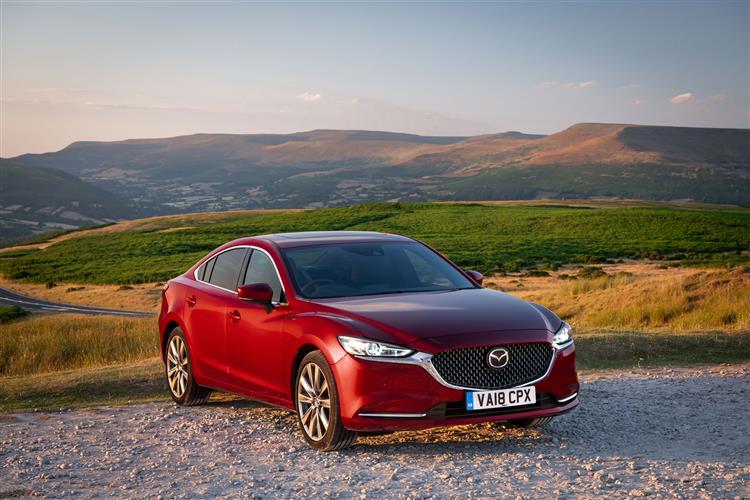