The Nissan Juke is wilfully weird but it's hit a nerve with British buyers who love the thing. Jonathan Crouch takes a look at the MK2 model.

If you need a car that blends into the background, look somewhere else. Nissan's Juke is a small SUV that's sold like hot cakes because it makes a visual statement. The second generation version keeps the design extreme but adds more space, smarter looks, extra equipment, greater efficiency and plenty of personalisation options.

There's nothing quite like a Nissan Juke, part SUV, part sports coupe, part hot hatch - with a few bike and rallycar genes thrown in for good measure. It sounds an unpromising mix but against the odds, Nissan has made it work and in this original version of this car, defined once and for all what the market's smallest breed of crossover-class car should be like. Here's the second generation model. What was most amazing about the original Juke was that a company the size of Nissan could build it. The usual procedure is for a maverick designer to come up with just such a concept only for company heads to shelve it, for customer clinics to reject it or for marketing pressure to water it down. Somehow the earlier Juke survived all of these potential trapdoors and this MK2 model remains singularly the most distinctive family car on sale today.

The Juke range kicks off in second generation form with the 1.0-litre turbocharged three-cylinder petrol engine we've already seen in Nissan's Micra supermini, with either a six-speed manual gearbox or an all-new seven-speed dual-clutch automatic, replacing the CVT transmission previously offered. Power stands at 115hp with up to 200Nm of torque available on overboost. Nissan claims 0-62mph in 10.4 seconds for the manual and 11.1 seconds for the DCT automatic variant, with both topping out at 112mph. Expect a plug-in hybrid version to be added in due course. At the wheel, long-time Juke owners will find the driving position is massively improved - there's at last a reach-adjustable steering wheel and smart Monoform sports seats are standard. In the manual model, the gear lever now sits more purposefully on the centre console and operates with a shorter throw. Plus of course there's plenty of driver-assistance technology, primarily Nissan ProPILOT, the brand's semi-autonomous driver aid. This is capable of controlling the throttle, braking and steering while driving in a single lane on motorway-style roads. It's optional on N-Connecta trim cars and standard from Tekna grade upwards. In addition, the Juke gains intelligent automatic emergency braking with pedestrian and cyclist detection, speed-limit and traffic-sign recognition, lane-keep assist and rear cross-traffic alert. 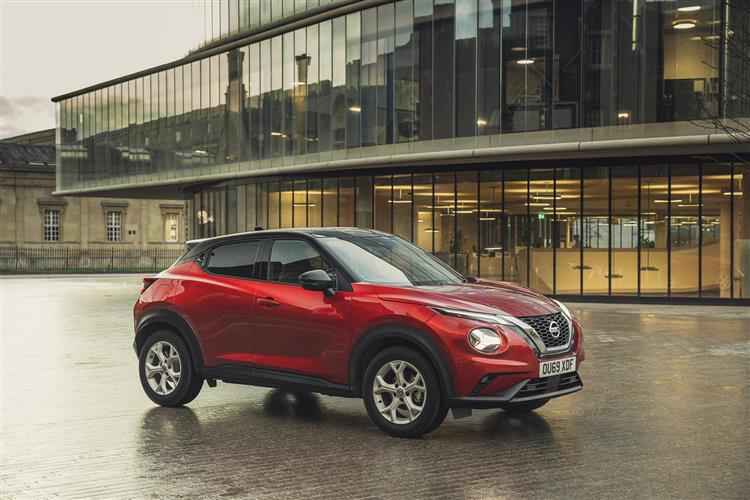