WATCHING THE DTEC-TIVES (some text hidden)

Honda hasn't exactly been at the forefront of diesel engine development. But the tenth generation Civic hatch gets a pretty advanced 1.6-litre oil burner. Jonathan Crouch reports on the lightly revised version of this model.

The improved Honda Civic 1.6 i-DTEC might just be the Honda diesel you've been waiting years and years for. With 120PS under its belt, it's got a bit about it, but will return up to 62.8mpg (WLTP) and up to 93g/km (NEDC) - pretty good for a family hatch.

It took Honda an awful long time to get enthusiastic about the idea of diesel power. In fact, the 1.6-litre i-DTEC unit we're going to look at here powering this tenth generation Civic is actually only the second diesel the company has ever designed for the European market. It's been significantly improved for use in this tenth generation Civic model. The enhancements include a reduction in cylinder friction, thanks to 'super plateau honing' of the bores to enable smoother piston movement. The 1,597cc engine uses the same advanced Bosch fuel injection system as before, and features a small, high-efficiency turbocharger, a low-pressure exhaust gas recirculation system and a high-intake flow, high-swirl cylinder head port. A high-strength, lightweight slender crankshaft and all-aluminium, open-deck, high-pressure, die-cast engine block minimise the engine's weight. For the new i-DTEC, additional cast ribs have been added to the cylinder block to increase structural rigidity and, consequently, improve the management of noise, vibration and harshness. It all sounds quite promising doesn't it?

This 1.6-litre diesel has been lightly revised in recent times but remains designed to offer high performance and low emissions, going about its job in a very Honda way. For a start, it's extremely small and light for a diesel lump. It makes 120PS at 4000rpm, which is impressive enough, but perhaps more interesting is the 300Nm of torque it can develop at just 2,000rpm. The engine's built in Swindon and designed for the European market. As with the petrol Civic variants, this 10th generation model gets a properly sophisticated suspension package. This model cruises over potholes its direct predecessors would have crashed through and does so with the demeanour of a much larger, more luxurious model. Of equal importance are the changes made to the structure of this MK10 model, all enabled by a significantly larger platform that's a full 52% stiffer than the previous generation chassis and positioned 10mm lower to the ground to improve the centre of gravity. All that's simply got to make a significant difference and sure enough, the grip and body control you get with this Civic is a significant improvement over what was served up before, further contributing to the 'big car' feel we referenced earlier. The steering's direct and responsive too, though lacks the final 'enth' of feel that sets a rival Ford Focus apart from its rivals in this regard. 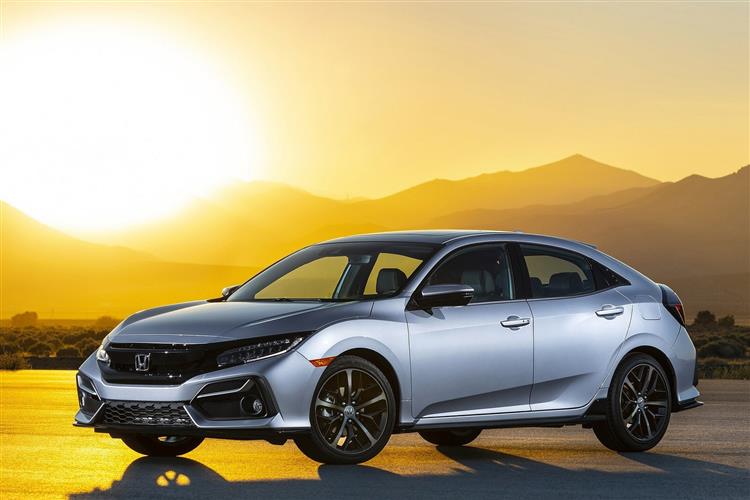