The top 1.6 T-GDi petrol version of Hyundai's Kona sets its sights on the plushest small supermini-based SUVs in the Juke and Captur segment. Jonathan Crouch drives it.

'You drive it. You define it.' That's how Hyundai wants us to view this car, their small Kona SUV. If you like cars of this kind, you're probably going to like this one because it ticks all the usual boxes in terms of style and fashionability. There's more though, to this little Crossover than initially meets the eye. Let's try it in top 1.6 T-GDi 4WD petrol form.

Every mainstream brand you can think of is investing in SUVs these days. But delve into the detail and you'll find that some are taking this segment more seriously than others. Here's a manufacturer who knows just what a difference a car of this kind can make. With a product designed precisely for the needs of buyers in the fastest-growing part of this sector - that for smaller 'B'-segment supermini-derived designs. Welcome to the Hyundai Kona, tested here in op 1.6 T-GDi 4WD petrol guise.. Launched in the Autumn of 2016, the Kona's now the entry point to the company's expanded and now much wider-ranging cutting-edge SUV line-up, slotting in just below the mid-sized Tucson, which itself sits below the larger Santa Fe and Grand Santa Fe models. Together, all these cars are shortly expected to account for up to half of the brand's total worldwide sales output - reflecting the fact that on its own, the current Tucson found over a quarter of a million buyers in its first couple of years on the market. On that basis, this more affordable, more accessible Kona model is likely to become a familiar sight on our roads.

On the move, it's probable that likely buyers will approve of the attributes that Hyundai has prioritised here - refinement, ease of use and the way the company's light but accurate 'Motor Driven Power Steering' system makes the car so easy to precisely place on the road, whether you're in town or threading your way at speed through corners on the open road. The 177PS 1.6 T-GDi petrol unit we're testing here can only be had with a DCT 7-speed dual-clutch automatic gearbox and an on-demand 4WD system. It's capable of 62mph from rest in 7.9s en route to 127mph. That's if you select the most dynamic of the three drive modes the auto gearbox has to offer - 'Sport' - the other two being 'Comfort' and 'Eco'. Going for the petrol 1.6 means your Kona will come fitted with more sophisticated multi-link rear suspension, with improves the slightly firm ride that characterises lesser variants on poorer surfaces. It also gets you a 4WD system with an on-demand traction set-up that'll provide extra off road grip. As for off road capability, well small SUVs like this one aren't expected to provide very much of that, so Hyundai hasn't delivered much of it here. It's the usual kind of on-demand system able to push up to 50% of torque to the rear wheels should a lack of traction demand it. 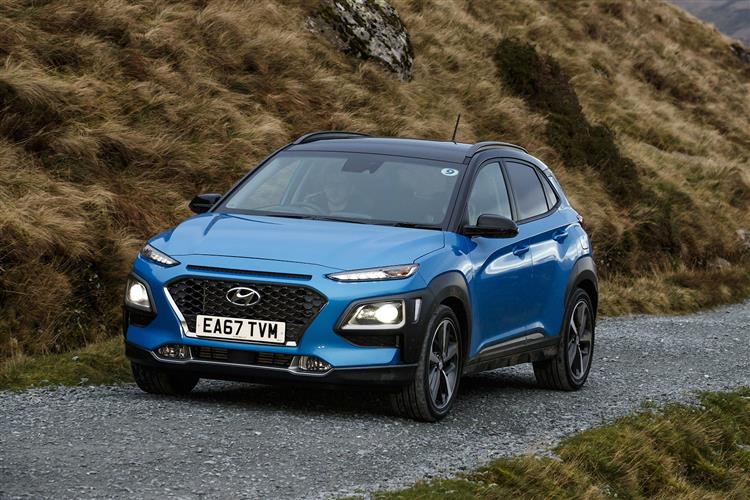