GET IN LINE (some text hidden)

Ford expects demand for its Fiesta ST-Line supermini warm hatch to be strong. Jonathan Crouch looks at what's on offer.

Not everyone needs an ultimately powerful little hot hatch. High insurance premiums and even higher asking prices can often put paid to shopping rocket dreams. Which is why some makers will sell you a supermini with all the look and feel of a real GTi but none of the drawbacks. Here's Ford's solution, the Fiesta ST-Line.

We've had plenty of really great sporting Ford Fiestas. In fact, the Blue Oval brand's hot hatch legacy around this model goes all the way back to the XR2 of 1981, with a history subsequently embellished by the more powerful RS1800 and RS Turbo models that followed it. Best of all was the hot hatch 1.6-litre Fiesta ST launched in 2013. Unfortunately, in current 1.5-litre EcoBoost form, it costs the best part of £20,000. So what if you could have a sporty Fiesta that looks just the same for not much more than around £16,000? That sounds more like it. It's the recipe delivered by the Fiesta ST-Line. Of course, going the ST-Line route isn't going to get you the kind of power you'd enjoy n a fully fledged ST. If that's not an issue, then potentially, there's plenty to like here.

Fiesta ST-Line buyers get a choice of four engines. Three of them are variants of the brand's three cylinder 1.0-litre EcoBoost petrol turbo unit, developing either 100, 125 or 140PS. If you really must, there's also a 120PS 1.5-litre TDCi diesel variant too. We'd go for the 100PS petrol variant. Choose one of the other derivatives and you're getting to the point where you might as well have shaken the piggy bank a little further and gone for a fully-fledged ST model. The 1.0-litre variant in contrast seems to give you everything you need without too much of what you don't. Rest to 62mph in the 100PS model takes 10.5s en route to 113mph and working the little powerplant hard delivers a pleasant, buzzy thrum. The 140PS version gets to 62mph in 9.0s on the way to 125mph. Through the bends, the handling should be sharp, thanks to a 10mm lowered chassis and the well-weighted steering and short, crisp gearshift feel we've experienced in other Fiestas. The fact that the suspension is a touch softer than that of the full-fat ST may actually even be of benefit on bumpy roads, where this ST-Line variant is unlikely to crash through tarmac scars quite as much. 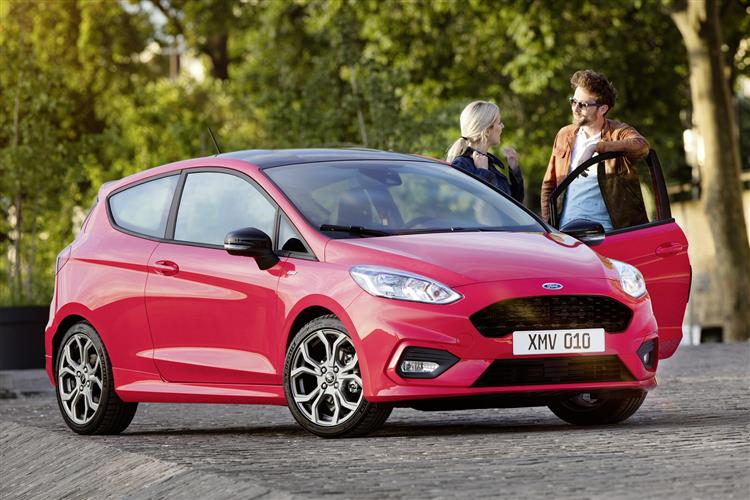