Mazda's second generation CX-5 will be at its most popular in SKYACTIV-D 2.2-litre 150PS diesel form. The experts at Car & Driving find out why.

One of the most popular and rapidly expanding market sectors is that for Qashqai-sized Crossovers and Mazda's CX-5 has gained a reputation as one of the most engaging of these. With this second generation model, the Japanese firm aims to offer more refinement, lower running costs and an even better drive than the original. Does it hit the mark? Let's check out the volume SKYACTIV-D 2.2-litre 150PS diesel version and find out.

Mazda scored a big hit with the first generation CX-5, so the second generation version of this Qashqai rival is hugely important for them and will sell most readily in the 2.2-litre SKYACTIV-D diesel 150PS guise we're going to look at here. The engine and optional AWD system are much the same as before. However, look at the details and you see plenty of areas where ths car has been refined, honed and improved. It sticks to Mazda's 'Jinbai-Ittai' idea of car and driver as one harmonious unit, but it also has a new mantra of 'Refined Toughness'. That comes with a promise of a stronger body, quieter engines and better handling. These are important factors in a class packed with talented contenders. Does this Mk2 CX-5 have what it takes to get the upper hand?

Mazda often goes its own way with its cars, but Crossover buyers' demands mean that modern car makers can't stray too far from the mainstream. So, this second generation CX-5 concentrates on honing refinement, handling and comfort. Is it a success? Well, in some ways, yes. This MK2 model CX-5 handles with all of the agility and precision we've come to expect of cars from this Japanese brand and it deals with lumpy roads in a calm, efficient manner. There's also 'G-Vectoring Control' that adjusts the steering assistance depending on hard the car is being driven around a bend. We find it makes the tiller feel a little too light and remote, but the CX is certainly easy to pilot around town or along the motorway. There are two versions of the 2.2-litre SKYACTIV-D diesel engine available, offering either 150 or 175PS. Most choose the 150PS model we're looking at here because it gives you the option of 2WD as well as AWD and isn't much slower than the pricey top variant. And off road prowess? Well, as with the systems employed by most of its rivals, this car has an optional AWD set-up in which the torque is automatically split according to the terrain you're on, so it can direct 100% of drive to the front wheels in normal conditions, with up to 50% then directed to the rear wheels if slip is detected. 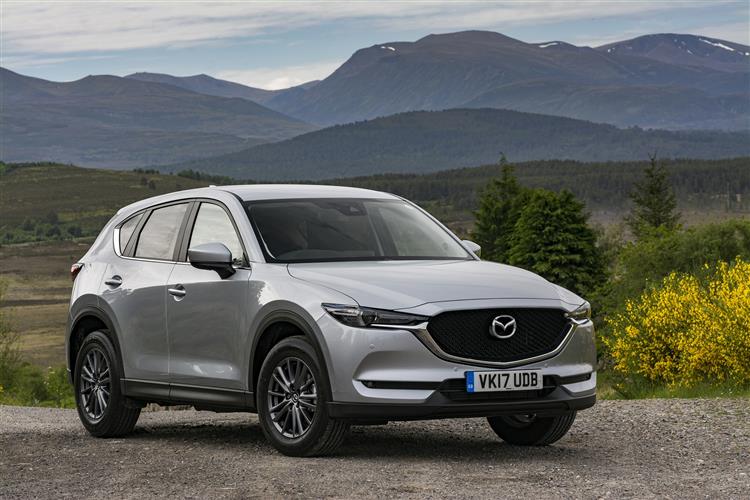