Skoda is having decent success with its mid-sized SUV, the Karoq, recently subtly improved. Jonathan Crouch looks at what this mid-sized Czech SUV has to offer.

Skoda is getting serious about SUVs and the core of the company's Crossover range is found with this mid-sized Qashqai-class Karoq model. It gets all the latest Volkswagen Group engineering, now including the brand's latest TDI technology, plus there's a hi-tech MQB chassis and cutting-edge safety and infotainment features. Everything in fact, that you'd want from a modern family-sized SUV of this kind.

Brand identity is everything in the automotive world, so it seems hard to understand why back in 2017, Skoda wanted to abandon one of their most recognisable name plates, that of the Yeti. Yet the Czech maker did just that, replacing that model line with this one - the Karoq. The reason why was that the company wanted to emphasise that this car is a different, larger and more sophisticated SUV than the Yeti ever was - or could be. The Yeti couldn't ever quite decide whether it wanted to be a Juke-shaped supermini-sized SUV or a Qashqai-shaped family hatch-sized model. This larger Karoq has no such dilemma, firmly targeted at the Qashqai sector - and offering a larger boot, amongst other incentives, to tempt buyers away from Nissan's market leader. If you're wondering if the word 'Karoq' has any meaning, then we'll tell you that it's taken from the language of an Alaskan tribe and, roughly translated, means 'car arrow'. Make of that what you will.

Under the skin, this Skoda uses much the same MQB chassis as you'll find in the Volkswagen Group's rival SEAT Ateca and the Volkswagen T-Roc. The set-up with this Karoq is deliberately more comfort-orientated than it is in the Ateca. The various powerplants on offer are all familiar from other Volkswagen Group models. There are five turbo-charged direct injection engine options. Things kick off with a 115PS 1.0-litre TSI petrol unit but most choose the 150PS 1.5 litre TSI powerplant. There's also a 190PS 2.0 TSI variant. There are also three TDI diesel engines, a 115PS 1.6, a 150PS 2.0-litre unit and, the most recent addition, the Wolfsburg conglomerate's latest more eco-friendly 190PS 2.0 TDI powerplant. The two core diesel drivetrains can be ordered with a 6-speed manual gearbox or 7-speed DSG auto transmission. The 1.5 TSI petrol variant (which is auto-only) uses cylinder deactivation for an exemplary combination of performance and efficiency. Only the top 2.0 TDI diesel and 2.0 TSI petrol variants are available with 4WD; in fact you have to have AWD with these flagship versions. These derivatives are also fitted with a special 'Off Road' mode and hill descent control so that you can more easily slither down slippery slopes. In general though, this Skoda's limited ground clearance makes testing off road forays fairly inadvisable. The Karoq is much happier being used for tarmac use and an option worth considering here is the 'DCC' 'Dynamic Chassis Control' adaptive damping system that can considerably improve the ride over poor surfaces. It works through the settings of the standard 'Driving Mode Select' system. 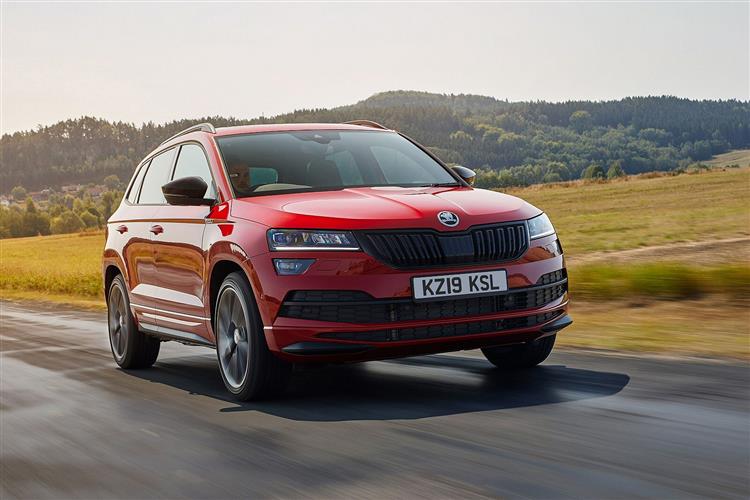