Volkswagen's sleek Arteon is a four-door coupe that offers a sleeker, yet still very practical alternative to style-conscious compact executive segment models like Audi's A5 Sportback, BMW's 4 Series Gran Coupe and Alfa Romeo's Giulia. It's a design styled with much more individual identity than was the case with the old CC model, a high class car that doesn't need a ridiculously expensive bootlid badge to stand out. And a very desirable one indeed.

Uniqueness is a quality you usually have to pay royally for, especially when it comes to cars affordable enough for you and I to consider. Once upon a time, drivers seeking it in the Mondeo medium range market would pay a premium for a prestigious badge and feel themselves special with an Audi, a BMW or a Mercedes on the driveway. But in an age where so many now do just that, you begin to wonder these days just how special that would be. So what if uniqueness - specialness - in a car of this kind were to be not in the badge on your keyfob but in the design of the car itself? Something very different from anything else you could buy for the money. Something like this, the Volkswagen Arteon. Quite a few of the underpinnings used in this model are borrowed from humbler members of the Volkswagen line-up - but then that's also the case with obvious rivals. It's the dressing that counts, which in this case is very smart indeed and built around a whole raft of efficient high technology. Let's check it out.

British buyers get the Arteon with a choice of five engines. Diesel folk choose between a 2WD 2.0 TDI 150PS model with manual or auto transmission. All the other variants are auto-only. For other diesel folk, there's a 2.0 TDI 190PS variant. Or a 2.0 BiTDI 240PS auto-only 4MOTION version. For petrol people, the choice is between a 2.0 TSI variant which comes in 190PS form with 2WD or in 272PS form with the 4MOTION set-up. Under the skin, the Arteon rides on the same MQB platform as Volkswagen's current Golf, Passat, Tiguan and Touran models. On the road, early reports suggest that you can expect luxury segment standards of ride, even if you specify the huge optional 20in wheels and low-profile tyres. There's an adaptive damping system and standard 'progressive' variable-rate power steering. Don't expect the combination to deliver BMW 4 Series Gran Coupe standards of driver involvement though. As for performance, the 2.0 TSI 272PS petrol model makes 62mph from rest in 5.6s on the way to an artificially-restricted top speed of 155mph. For the 240PS diesel, the figures are 6.5s and 152mph. 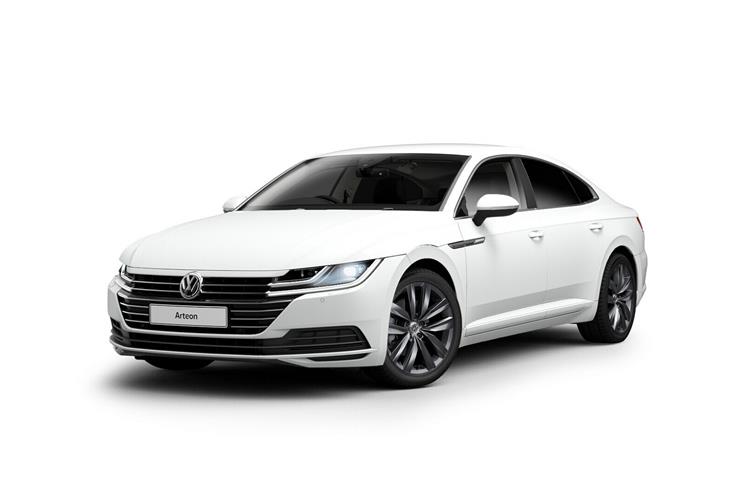