Volvo's V90 Cross Country model gives family-minded executive buyers who live out in the sticks a version of this large Swedish estate they might like. Jonathan Crouch reports on the latest version.

Volvo's V90 Cross Country offers a more conventional, less showy alternative to that luxury SUV you might have been considering. AWD is standard of course, as is a higher ride height and a wider track. It won't get you across the Serengeti but it'll be just as capable as any luxury SUV in a snowy snap.

Not everyone wants a luxury SUV. Not even luxury SUV buyers. Volvo knows this of course, the Swedish brand being a major player in this market with its strong-selling XC90 model. Hence the company's decision to offer a more conventional alternative to buyers in this sector in the form of this V90 Cross Country model. As you can see, this essentially is a raised version of the V90 estate with a few rugged-ised styling modifications, but you do get AWD, a feature not available to buyers wanting the volume B4 mild hybrid engine in the standard range. And there's as much winter driving capability as you'll probably ever need. Plus, as you'd want, it remains as Swedish as meatballs and as practical as ever. The prospects then, are promising.

On paper, this V90 Cross Country should feel just like any ordinary V90 estate to drive. In practice though, it feels a little softer and more supple, though you can expect a touch more bodyroll, courtesy of the extra ride height. Ultimately, it's the kind of feel you'd get from a luxury SUV, which is presumably what Volvo was aiming at. On that subject, we should point out that AWD is standard. That might sound an obvious thing to say in relation to a car like this but the old Volvo XC70 model that this model effectively replaced was available in 2WD guise. Engine-wise, just as in mainstream versions of the standard V90, buyers now get the choice of two four cylinder mild hybrid diesel units, a 190PS B4 variant and a 235PS B5 derivative, both equipped with smooth 8-speed auto transmission. There's also a 310PS T6 petrol version, but that'll be a rare choice. A 250PS petrol T5 engine's offered too. On the move, you aren't served up anything that encourages much driving involvement - blame the rather vague steering for that - but in compensation, there's unruffled poise and exemplary refinement. You get supple standards of ride comfort from the soft suspension too and there's the option of rear air suspension if you want it. A standard 'Drive Mode Settings' driving dynamics system allows you to tailor throttle response, steering feel and auto gearshift timings to suit the way you want to drive. And if you do push on a bit, grip and traction are actually quite impressive. 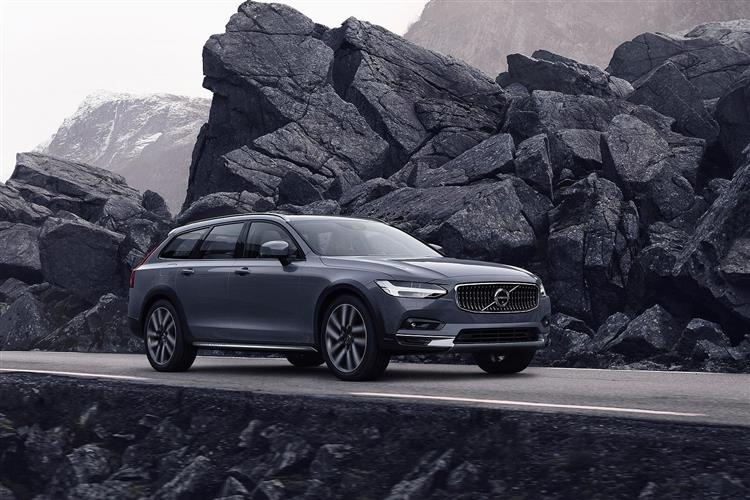