WE HAVE IGNITION (some text hidden)

Crossovers seem to be getting smaller as interest in them gets bigger. Take this Suzuki Ignis for example. It's just 3.7m long, so it's probably more accurate to call it a citycar-based Crossover, though one that has a very fashion-orientated remit. Here's the lightly facelifted improved version, which focuses on mid hybrid petrol power.

Suzuki has an enviably wide range of compact Crossovers. There's the utilitarian Jimny, the fashion-conscious Vitara, the family-friendly SX-4 S-CROSS; plus you could even count the 4WD version of the Swift supermini. Since 2016, the brand's line-up has also featured a further option of this kind, this trendy little Ignis, now subtly improved. The model sits on the new generation platform we first saw in the Baleno but this time clothes it with much funkier styling that Suzuki hopes will interest a whole new raft of image-conscious urban-based buyers. This platform targets the reduction of weight as well as further increased rigidity and the lightest Ignis model has a kerb weight of just 810kg. Power comes from a 1.2-litre petrol unit that features mild hybrid assistance.

All Ignis buyers now get an updated 'K12D'-series 1.2-litre Dualjet petrol engine which features a new dual injection system and can optionally be ordered with CVT auto transmission if you want it. This powerplant is one also used elsewhere in Suzuki's range in both the Swift and the Baleno. As with the Baleno, Ignis buyers have the option of ordering this powerplant in more frugal SHVS mild hybrid form. This compact and lightweight unit incorporates an Integrated Starter Generator (known as ISG) which acts as both a generator and starter motor. The ISG is belt driven and assists the engine during vehicle take off and acceleration and also generates electricity through regenerative braking. The SHVS system only uses its conventional engine starter motor when first started from cold. Under all other conditions, it uses the ISG unit to allow smooth and quiet engine restarts. The energy assistance provided during acceleration enables the SHVS to be known as a mild hybrid system which is ideally suited to a compact car and adds just 6.2kg to the overall weight. SHVS buyers also get the option of Suzuki's ALLGRIP 'AUTO' four-wheel drive system. First introduced in Swift, this is a well proven and simple fully automatic and permanent four-wheel drive layout which transfers additional torque to the rear wheels when required via a viscous coupling. Enhancements to the Ignis ALLGRIP system include Hill Descent Control and Grip Control. Grip Control activates on slippery surfaces at speeds of less than 18mph. Once switched on by the driver, it focuses torque on the driven wheels that have grip and will quickly apply braking to the wheel that is spinning. 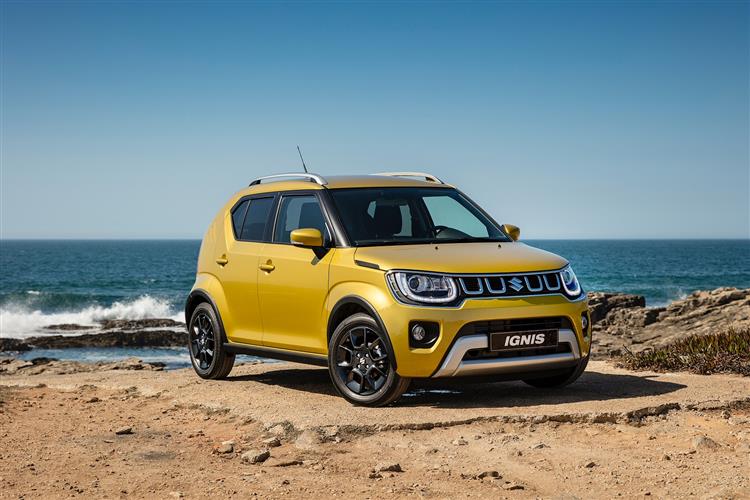