A seven-seat vehicle with 1.5-litre diesel power doesn't sound like a winning combination but Renault's 1.5-litre dCi engine occupies the Grand Scenic engine bay with some aplomb. Performance is nothing special but economy hits improbably highs and there's enough torque to get the big people carrier moving at low speeds. Build quality and ride comfort in this third generation range are particular Grand Scenic strongpoints.

Lots of power is a nice thing to have in a car but it isn't always absolutely necessary. Motorists who are willing to put up with acceleration that's on the sluggish side and pulling power of sub-epic proportions can save a lot on the upfront purchase price and in the running costs of their vehicle. The question is, how low is it sensible to go? Ordering the seven-seat, 1.5 tonne Renault Grand Scenic with a 1.5-litre dCi diesel engine looks like sailing a little too close to the wind but if all you're after is a roomy family runabout, the French marque's little diesel could pull it off. In this case, we're looking at the MK3 Grand Scenic model, altogether more sophisticated and stylish than its predecessor. Here, the design is far more stylish and driver-centric than before, plus there's more space and storage inside along with more sophisticated infotainment technology. Renault promises you can take seven folk here, while enjoying a prodigious 300Nm of pulling power, putting out less than 130g/km of CO2 and averaging over 55mpg. Sounds promising doesn't it?

You can find the 1.5 dCi engine in a number of Renault's smaller products. None of them is as weighty a proposition as the Grand Scenic, however, or has the potential to gain weight with up to seven passengers and their luggage piled on board. Added to this, the engine's maximum power output is just 120hp, making it the least powerful of the Grand Scenic's engines. On the plus side, there's torque of 300Nm available at 2,000rpm, which is enough to provide very eager pulling power. It gives the car enough muscle to cope at low speeds even with a large payload on board but the emphasis is on coping. Ultimate performance though, is fairly pedestrian, as a 0-62mph time of around 12.5s demonstrates. You automatically approach any seven-seat MPV measuring four and a half meters from nose to tail with certain expectations about how it will drive but it's worth giving the Grand Scenic the benefit of the doubt. Comfort is the priority and rightly so but Renault has also managed to instil a high degree of poise and manoeuvrability. With its suspension system lifted from the Megane, the Grand Scenic resists cornering roll well and has plenty of grip at the front wheels. The ride quality is first class, the car tiptoeing over poor road surfaces and avoiding too much wobbliness on sudden undulations. The steering is sometimes too light and the manual gearbox isn't the slickest but in general, and considering the Grand Scenic's family remit, Renault has got the balance just about right. 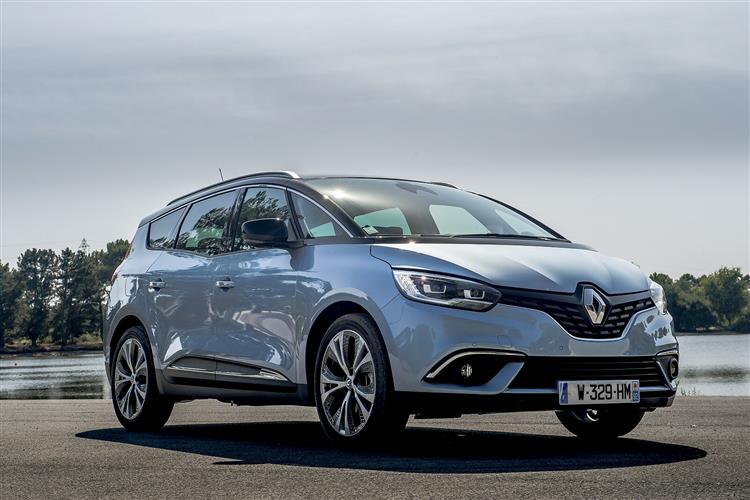